Zero-hours contracts – are they banned or not? 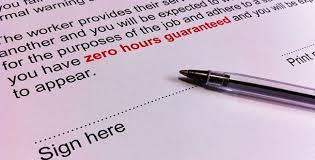 This represents a 10 per cent increase on the previous yearâ€™s figure of 64,000. Itâ€™s a worrying trend which we fear will only increase as Boris Johnson sets about delivering his Brexit dream of a low-wage and low-tax economy with minimal employment rights for workers.

This is where the Scottish governmentâ€™s Fair Work First policy comes into play in the absence of employment law being devolved â€” which Unite supports. The policy sees conditions attached to workersâ€™ pay and conditions for firms seeking grants or public contracts. It includes paying employees the Scottish Living Wage and perhaps this contractual clause is helping.

There remains a great deal of confusion on what now determines whether a company gets public funds through an enterprise agency grant or on what grounds a company will be refused a public procurement contract through the new Fair Work First criteria.

For example, zero-hours contracts are not banned but instead the Scottish government says that there should be â€śno inappropriate use.â€ť From our perspective any use is inappropriate and it should be leading by example by pledging to ban the use of these contracts â€” instead of leaving a back-door open.

We have written to government ministers on a number of occasions in order to dig a little bit deeper on what this criteria now means such as Fergus Ewing, the cabinet secretary for the rural economy, regarding the ÂŁ1.7 million award to Bhagat Holdings Limited. The company has taken over the site of the former Pinneys of Scotland seafood plant in Annan.

Unite is pleased that around 120 much needed jobs are likely to be created and itâ€™s right that levers are used to attract investment. However, we have got to demand that in return for taxpayersâ€™ money, zero-hours contracts will be banned completely and that trade unions must have access to the workforce as conditions.

The Scottish government when asked directly on these issues in parliament stated that it will â€śattach conditionality to as many grants, funding streams and public contracts as we can by the end of this parliamentary session.â€ť In our opinion this is evasive and elastic in terms of the timeline for implementation.

The time for action is now. Unite is determined to hold every government to account and we will not let the Scottish government off the hook on creating decent working standards and conditions for all who live here.

This entry was posted in UK Employment Rights. Bookmark the permalink.