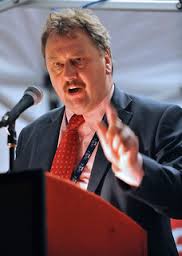 David Cameron‚Äôs ringing endorsement at the G20 of the proposed EU-US trade deal, the Transatlantic Trade and Investment Partnership (TTIP), was perhaps predictable but also has opened up the topic of TTIP and its like to greater public awareness. Until Brisbane discussion of this new generation of multi-lateral trade agreements was very much a topic for aficionados.

From opening up TTIP to public debate we can hopefully unspin the web of secret negotiations that are taking place more or less across the planet that are seeking to bind the peoples of the world into an all-encompassing corporate friendly, neo-liberal settlement.

As well as TTIP, currently the Labour movement should also be concerned about the proposed EU agreement with Canada, CETA; a multilateral agreement on trade in services, TISA; and, a parallel deal that the US is trying to construct in the Pacific Basin, with the exclusion of China, TPP.

The treaties are at different stages in the negotiations with CETA being initialled in Ottawa quite recently; TPP apparently open to some bi-partisan deal between the Republicans and a lame duck President Obama and Cameron promising to put ‚Äúrocket boosters‚Äù behind the TTIP negotiations.

How important are these treaties? If successful the TTIP zone would cover a region accounting for 60% of global GDP, 33% of world trade in goods and 42% of world trade in services. The 12 countries negotiating TTP account for 40% of global GDP. Even accounting for the overlap of the US being included in both sets of figures these treaties indicate a global reach that could tie the world‚Äôs economies to a system outside, as becomes apparent, the control of national governments.

As far as the responsible EU Commissioner, Celia Malmstrom, is concerned CETA, after two years of legal scrubbing, is a ‚Äòdone deal‚Äô. That, however, remains to be seen. In the EU it seems to be an unresolved but important political and legal point to establish if the treaties may be defined as a ‚Äúmixed agreement‚Äù or not. A ‚Äòmixed agreement‚Äô would have to be referred to all 28 members states for ratification (no problem for Cameron‚Äôs coalition presumably).

The outgoing Commission strenuously tried to avoid allowing the treaties to be so described but in the confusion that has surrounded the appointment of the new Commissioners, Malmstrom has said that TTIP is a ‚Äòmixed agreement‚Äô and that maybe the status of CETA is not final. Commission President, Jean-Claude Junkers has moved to reverse or limit Malmstrom‚Äôs opinion.

The Canadian unions are not happy with the way that CETA has been handled. Larry Brown, National Secretary-Treasurer of the National Union of Public and General Employees, said at the time of the initialling:

During negotiations we were told that the process was secret and that Canadians couldn‚Äôt see the text or have input into the agreement, now they have what they claim is final text and we are told it is not open to discussion or debate. This is an outrageously undemocratic process for an agreement that will have wide-ranging consequences for all Canadians.‚Äù

In the run up to Brisbane the International Confederation of Trade Unions and the ‚Äòhost‚Äô national federation, the Australian Council of Trade Unions called for a halt to the TTP negotiations.¬ÝThe ICTU General Secretary, Sharan Burrow, said:

Although it seems that a labour chapter with a certain degree of enforceability will be part of the TPP, if ever agreed, we felt that this would not be enough to endorse the TPP ‚Ä¶ Besides, the labour chapter ‚Ä¶ does not cover all core labour standards and sub-national labour law is not within the scope of the agreement. More to this, practical experience has shown that governments are reluctant to use labour chapters. This is not to say we do not support a labour chapter, but that TTP‚Äôs and¬Ýother future trade agreement‚Äôs impact on workers need to be considered as a whole‚Äù (my emphasis).

Examples of these wider issues contained within TPP, which almost always are features of the new generation of trade treaties (including CETA and TTIP), are:

Meanwhile in the US, lame duck President Obama is working on his legacy which seems to be delivery of TTP and possibly TTIP. There is a possibility that the new Republican majority in Congress will help him deliver on one, maybe two, of the treaties. The Republican Senator, Mitch McConnell, has already made the point that maybe the trade treaties are one area at least that the President and Republicans make find common cause.

This unlikely alliance will do this by passing a Trade Promotion Authority (TPA) that will give the President an ability to bring one or both treaties that he and his team have negotiated to Congress, which will vote for or against it but will not be able to amend it. If the Republicans can get possibly six Democrats to switch Obama is in with a shout of getting TPP or less likely TTIP through. Congress would be asked to vote for the TPA before it knew the terms of TPP or TTIP!

The US unions have this month launched a major campaign against ‚Äòfast track‚Äô as the TPA is known, including video advertisements showing in the metro station used by all presidential and congressional employees.

Celeste Drake of the US union federation, the AFL-CIO, makes the telling point that all of the trade deals that have benefited corporate American ‚Äì but not American labour ‚Äì have all been pushed through Congress under ‚Äòfast track‚Äô ‚Äì North American Free Trade Agreement, World Trade Organisation, Central American Free Tarde Agreement, the US-Colombia Free Tarde Agreement, the US-Korea agreement. NAFTA displaced 700,000 manufacturing jobs and has helped drive wages down. The WTO deal that allowed entry to China has cost US workers $37 billion is lost wages in a single year (2011)

The President of the Communication Workers of America, Larry Cohen, says:

US companies and multinational corporations can‚Äôt wait to move our remaining manufacturing jobs to a nation where the government will protect multinational investment. Then, US and other workers will be told to compete with wages half the rate of Mexico, Central America and China ‚Ä¶ if any of the TPP nations improves worker rights ‚Ä¶ a multinational corporation can sue in a secret arbitration tribunal for any loss of future profits die to legislative action.‚Äù

The legal action against nations that Cohen raises is the very thing¬Ýthat Cameron pooh-poohed in his Brisbane speech ‚Äúwe‚Äôve signed trade deal after trade deal and it‚Äôs never been a problem.‚Äù

It‚Äôs not a problem if you ignore this ‚Äì by the end of 2013 the number of known ISDS cases had reached 568, the number of countries that have been respondents in at least one case has increased to 98, with three quarters of cases brought against developing and transition economies (Latin America and the Caribbean account for the largest share), but EU countries ranked third as respondents with 21% of all cases.

The ISDS has become the major issue in Europe; to which in the UK can be added the future of the NHS.¬ÝOn the NHS Cameron in Brisbane said:

Some people argue in some way this could damage the NHS. I think that is nonsense. It‚Äôs our National Health Service. It‚Äôs in the public sector. That‚Äôs not going to change. It will remain free at the point of use.‚Äù

The EU has previously had what is called a ‚Äòpositive list‚Äô approach in free trade agreements, where those sectors specifically mentioned are the sectors opened up to liberalisation and corporations. CETA adopts a ‚Äònegative list‚Äô approach where the free trade agreement applies to all sectors apart from those sectors specifically listed for exclusion ‚Äì hence the ‚Äòlist it or lose it‚Äô label.

This is understood to be the approach in TTIP and Cameron has not chosen to ‚Äòlist‚Äô the NHS to exclude it from the provisions of the treaty, as, for example, the French have ‚Äòlisted‚Äô to given protection to their cinematography industry.¬ÝAs Unite‚Äôs Len McCluskey has said:

Why doesn‚Äôt David Cameron just make an explicit commitment to use his veto in Europe to get the NHS out of TTIP?‚Äù

ISDS within TTIP is proving to be major problem for the European Commission. When the Commission opened a public consultation on ISDS a remarkable 150,000 European citizens responded, the overwhelmingly majority against ISDS.

However, even if the ISDS clauses were removed it is open to speculation about how effective that may be. Most US corporations have subsidiaries in Canada, if CETA is indeed a ‚Äòdone deal‚Äô surely EU governments could be used by US Canadian subsidiaries as, for example, Australia is being sued by a Philp Morris subsidiary over cigarette plain paper packaging, this before TPP is signed, as a result of a previous bilateral deal signed by Australia.

There is a whole separate discussion about the issue of labour rights. Where under TTIP European workers and their unions would fear any ‚Äòregulatory coherence‚Äô, code for levelling down, around US standards. Republicans have warned against using TTIP to smuggle into the US Euro-style labour rights. Conversely with TPP, it is the US that has the higher standards and US workers and their unions would fear ‚Äòregulatory coherence‚Äô with South East Asia.

Many UK unions welcome the filing of a lawsuit by the Stop TTIP Alliance with the European Court of Justice to stop TTIP on the grounds of secrecy and ISDS, but the case could take a year and half to be heard.

More immediately, activists could sign the self-organised¬ÝEuropean Citizens Initiative on TTIP.¬Ý¬ÝUsually under the European Citizens‚Äô Initiative if a petition of 1 million signatures from at least 7 member states is presented to the Commission it will be referred for debate in the European Parliament. Outrageously, the Commission has declared that TTIP is exempt from the ECI hence the self-organised campaign.

This blog first appeared on the Left Futures website.