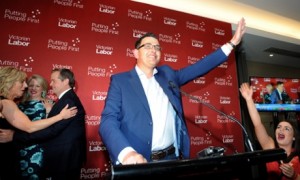 The Labor Party in Australia has won a stunning victory¬Ýin the state of Victoria with a swing of over 2% – basing their campaign on fighting for jobs, decent employment rights and working families.

New Victoria Premier Daniel Andrews summed up the¬Ývictory: ‚ÄúThere are people who wanted this election to be about workers and unions – and that‚Äôs exactly what it was.‚Äù

The National Secretary of the Australian Manufacturing Workers Paul Bastian said the direct community campaigning from union¬Ýmembers to put jobs and training at the front of voters‚Äô minds helped set the agenda on election issues.

The success of unions in targeting key marginal electorates and undecided voters proved the decisive factor on election day in Victoria.

‚ÄúHundreds of AMWU members worked hard to defeat the Liberals ‚Äì knocking on doors, campaigning in the community, calling other union members and helping on polling day,‚Äù Paul¬ÝBastian said.

‚ÄúThe Victorian result gives us hope that we will see out the Abbott Government after one term ‚Äì we must keep up the pressure.‚Äù

¬ÝThe solid swing against the Victoria Government was a stunning repudiation of its TV and print advertising, which tried to demonise Labor‚Äôs links with unions, an outmoded scare tactic which fell flat with voters.

Ms Hutchins¬Ýworked as a union organiser and industrial officer at the NUW before becoming, in 1996, the first women to be elected as Victorian Trades Hall Council assistant secretary in the organisation’s history.¬ÝIn 2001, the Transport Workers Union employed Hutchins as a senior organiser.