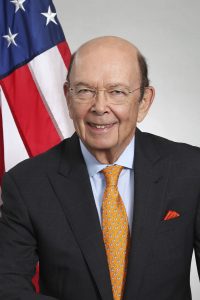 US Commerce Secretary Wilbur Ross has told US media that the US ‚Äì EU trade deal TTIP could be revived.

Ross said that whilst the US withdrew from the USA ‚Äì Pacific Rim deal known as TPP he is open to continuing talks on a proposed trade deal with the European Union despite a frosty atmosphere being developed by Trump towards Merkel – and vice versa.

“It’s no mistake that, while we withdrew from TPP – we did not withdraw from TTIP,” Ross said. Talks around the proposed Trans-Atlantic Trade and Investment Partnership were put on hold after Trump’s election last year.

“The EU is one of our largest trading partners, and any negotiations legally must be conducted at the EU level and not with individual nations,” Ross said. “Thus, it makes sense to continue TTIP negotiations and to work towards a solution that increases overall trade while reducing our trade deficit:.

Ross’ comments come less than a week after his meeting with German Economics Minister Brigitte Zypries, who told a German newspaper, “It is not likely the U.S. will resume negotiations over TTIP.”

Quite where this will leave the Brexit bound UK is anyone’s guess – probably on the outside looking in – or as Obama told the UK during the referedum “at the back of the line”.