Why Obama is happy to fight Elizabeth Warren on trade deals 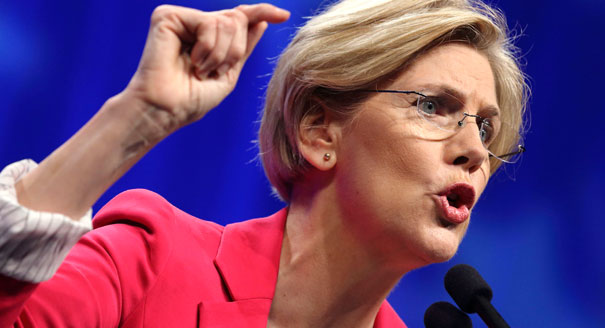 ŌĆ£SheŌĆÖs absolutely wrong,ŌĆØ Barack Obama said, before I could even get the question out of my mouth.

He was talking about Elizabeth Warren, the Massachusetts senator and populist crusader whom Obama helped elevate to national prominence. Warren generally reserves her more acid critiques for Republicans and Wall Street, but in recent weeks sheŌĆÖs been leading a┬Āvocal coalition┬Āof leftist groups and lawmakers who oppose the presidentŌĆÖs free-trade pact with 12 Asian countries.

This past week, as I had just reminded Obama, Warren launched her┬Āheaviest torpedo┬Āyet against the trade deal, alleging that some future president might use it as an excuse to undo the reregulation of Wall Street that Obama signed into law in 2010. In fact, as the White House quickly pointed out, language in the pact would expressly prevent that unless Congress voted to allow it.

Three days after that broadside, when we sat down at NikeŌĆÖs headquarters outside Portland, Ore., Obama still seemed unusually irritated.

ŌĆ£Think about the logic of that, right?ŌĆØ he went on. ŌĆ£The notion that I had this massive fight with Wall Street to make sure that we donŌĆÖt repeat what happened in 2007, 2008. And then I sign a provision that would unravel it?

ŌĆ£IŌĆÖd have to be pretty stupid,ŌĆØ Obama said, laughing. ŌĆ£This is pure speculation. She and I both taught law school, and you know, one of the things you do as a law professor is you spin out hypotheticals. And this is all hypothetical, speculative.ŌĆØ

Obama wasnŌĆÖt through. He wanted me to know, in pointed terms, that for all the talk about her populist convictions, Warren had a personal brand she was trying to promote, too.

ŌĆ£The truth of the matter is that Elizabeth is, you know, a politician like everybody else,ŌĆØ he said. ŌĆ£And you know, sheŌĆÖs got a voice that she wants to get out there. And I understand that. And on most issues, she and I deeply agree. On this one, though, her arguments donŌĆÖt stand the test of fact and scrutiny.ŌĆØ

This is remarkable stuff for Obama. All presidents are forged, in a sense, by the moments at which they come to public life. Obama entered politics during Bill ClintonŌĆÖs presidency, when urban liberals were growing disgusted with the presidentŌĆÖs strategy of ŌĆ£triangulation,ŌĆØ┬Āpopularly interpreted┬Āas the idea that you can win broad support by picking fights with the ideologues in your own party. Obama has always been reflexively averse to anything that might be construed as him pushing back against his friends to score political points with everyone else.

Throughout his presidency, Obama has mostly avoided public feuds with what his first press secretary, Robert Gibbs, liked to call the ŌĆ£professional leftŌĆØ ŌĆö even when itŌĆÖs meant sidestepping important disagreements on policy. Democratic politicians and interest groups, in turn, have been cautious in their criticism, offering only muted resistance when Obama stepped up the war in Afghanistan, or when he nearly negotiated a deal that would have restructured entitlements.

But like a marriage in which the spouses pretend to be happier than they really are, ObamaŌĆÖs polite alliance with the populist left appears to be suddenly crumbling under the weight of free trade. The more Warren and Senate colleagues like Bernie Sanders and Sherrod Brown attack the proposed Trans-Pacific Partnership, joined by big unions and environmental groups, the more liberated Obama seems to feel in portraying them as reckless and backward-looking, much as Clinton might have done. He evidences none of the self-doubt or conflicted loyalty that seemed plain when they criticized him for being too cautious on Wall Street reform or health care.

That he came to NikeŌĆÖs sparkling, resortlike campus Friday was telling in itself. Since at least the 1990s, labor activists have pointed to Nike as a company that exploited cheap foreign labor in order to increase the bottom line on sneakers and tennis shirts. (Sanders, citing a┬ĀEuropean study, charges that more than 300,000 workers in Vietnam work in Nike factories for something like 56 cents an hour.) ItŌĆÖs hard to imagine Obama, on some other issue or in some other stage of his presidency, choosing a setting quite so offensive to his base.

And yet here he was, sitting with me near a wall depicting marketable athletes (all the buildings at Nike are named for the sports heroes who made its logo synonymous with product endorsement), just after announcing that Nike intended to create 10,000 new jobs in domestic, high-tech manufacturing if the trade pact were approved. This time, rather than choosing his words carefully to preserve party unity, Obama was pressing his advantage.

ŌĆ£I had a conversation with all the labor leaders before this started,ŌĆØ he told me. ŌĆ£IŌĆÖve had a conversation with some of the more progressive members of Congress before. And IŌĆÖve listened to their arguments. And, as I said before, generally speaking, their arguments are based on fears. Or theyŌĆÖre fighting NAFTA, the trade deal that was passed 25 years ago, or 20 years ago.

For decades after the Second World War, free trade, like so much else at that time, was mostly a proxy for Cold War strategy. If you were a country that wanted access to American markets, all you had to do was take our side over the SovietsŌĆÖ. Practically speaking, America had little to lose in this proposition, since no one else could make the kind of inexpensive cars or clothing that might threaten domestic manufacturers. When American business did well, so too did its workers ŌĆö that was the axiom, and it was true.

By the 1970s, though, Europe and Japan, now 25 years past the war that leveled them, were starting to export Saabs and Datsuns and anything else you could make on a modern assembly line. And American manufacturers were starting to look beyond oceans for cheaper labor.

Rob Shapiro, a Clinton administration economist and free-trade advocate who has studied these trends, pointed out to me, when I told him IŌĆÖd be visiting NikeŌĆÖs headquarters, that in the 1960s virtually all the shoes on American shelves were made in American mill towns. Nike was one of the first manufacturers to start stitching them in Asia instead, at a fraction of the cost; today, of course, odds are not a single pair of shoes in your closet is American-made.

In this changed environment, free trade took on new importance ŌĆö and new peril. American retailers wanted access to cheaper, foreign-made goods (Walmart, as Shapiro puts it, is ŌĆ£built on trade liberalizationŌĆØ), and American manufacturers wanted access to the emerging middle classes in Asia. But all of that put pressure on American companies to make their goods overseas, so they could reduce labor costs and stay competitive. Suddenly, and years before most Americans really grasped what was happening, the interests of companies and workers diverged; what was good for businesses and shareholders was often ruinous for the labor they had employed.

NAFTA ŌĆö the North American Free Trade Agreement ŌĆö was essentially the first unilateral agreement between the United States and a developing country, in this case Mexico. (Technically speaking, Canada was also a party, but thatŌĆÖs not really where the action was.) Next came the so-called Uruguay Round in 1995, which established the World Trade Organization. Then China joined the WTO in 1999.

Most economists, according to Shapiro, would attribute roughly 10 to 15 percent of AmericaŌĆÖs economic unwinding ŌĆö that is, the loss of jobs and the stagnation of wages ŌĆö to this proliferation of free trade. But trade policies, and NAFTA in particular, have become a powerful symbol of political callousness to those Americans on both ends of the political spectrum who have lived through deindustrialization. And that symbolism is whatŌĆÖs most central in the fight Obama has taken on.

Warren and other critics of the Asian trade pact have seized on a series of complaints in their efforts to stop Congress from giving Obama so-called fast-track authority, which would enable him to put the final deal before Congress on an up-or-down vote, without endless amendments. (Obama, by the way, would be the first president in decades to be denied that authority ŌĆö and by lawmakers in his own party, no less.) Some of these complaints are more persuasive than others.

Opponents have charged that the deal is being┬Ānegotiated secretly┬Āand without their input. (Obama points out that anyone with access to the Internet will have 60 days to scrutinize the deal before he even signs it and sends it on to Congress, which would then begin its own period of evaluation, so itŌĆÖs not like anyone is going to wake up and find that Congress just sold the Lincoln Memorial to Taiwan.)

They see the deal as too protective of multinational corporations, like the way it extends patents for pharmaceutical companies, or the way it allows corporations with complaints to bring their disputes to special arbitrators, rather than to the courts. (Obama makes the point that America is party to 50 such agreements already and has never been successfully sued.)

TheyŌĆÖre furious that the deal would do nothing to end ChinaŌĆÖs currency manipulation, which contributes to AmericaŌĆÖs hurtful trade imbalance. (Obama argues that including the currency issue in this trade pact, rather than pursuing it separately, might expose our own Federal Reserve to lawsuits from other countries.)

To claims that more free trade means, inevitably, more job losses, Obama has vowed ŌĆö about twice every hour, it seems ŌĆö that the Trans-Pacific Partnership will have the most stringent labor and environmental standards of any trade deal in history. He says it will generate an extra $123 billion in American exports annually, along with $77 billion more in economic growth.

WhatŌĆÖs mostly going on here, though, is that frustrated liberals see in the Asian trade deal an opportunity to draw the line on globalization, period. No one thinks this deal is going to be the ruin of American workers, when all is said and done. What they think is that there has to be a moment when industry loses and the country finally turns its attention to the things you can do for workers, like raising the minimum wage (a more than reasonable suggestion) and relaxing rules that make organizing more difficult.

And this is what so frustrates Obama, to the point where he would come to make his stand at the headquarters of a company reviled by labor, almost as a provocation. Obama, as his detractors have often pointed out, is a study in cool-blooded analysis and professorial debate; whatever his gift of oratory, his real passion is for the triumph of reason over histrionics.

So you can see how it would annoy Obama no end that no matter how many mitigating facts and figures he throws at the opponents in his own party, their determination to sink the deal only intensifies. What they really want, it seems to him, isnŌĆÖt a better trade deal, but rather a time machine that can transport us all back to the moment before globalization began.

Obama assured me that heŌĆÖs right there with his party when it comes to making the case for a higher minimum wage or limiting the compensation of corporate executives ŌĆö all part of the national conversation about inequality and how to address it. ŌĆ£We are going to have to concentrate on getting our own act together to make sure that workers are getting a bigger share of corporate profits,ŌĆØ he said. ŌĆ£But IŌĆÖm not going to shrink the overall economic pie just because weŌĆÖre mad about some things that have happened in the past.ŌĆØ