Watch out! Brexit Won’t Save Us From Anti-Worker International Trade Deals 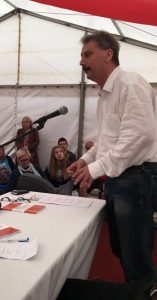 By Adrian Weir, Assistant National Secretary of the Campaign for Trade Union Freedom.

One of the central themes of the Campaign for Trade Union Freedom (CTUF) has been its opposition to the new generation of trade agreements – TTIP, CETA, TiSA and TPP – not least because of the deregulatory impact on employment rights that these treaties pose.

Those readers of the Morning Star who also follow the Centre for Labour & Social Studies – Class – on social media may have noted that right at the start of the referendum campaign I blogged about Brexit and the pro-corporation investor-state dispute settlement (ISDS) procedure contained within TTIP, making the point that Leave or Remain would be likely to make little or no difference to the rush to get these treaties signed.

I said back in May that ŌĆ£TTIP is an issue that transcends Remain or Leave not least because TTIP is just one part of the network of new generation deregulatory free-trade deals being negotiated around the globe.ŌĆØ

As things have turned out it seems to be that it is the treaty with Canada – CETA – that is being promoted for ratification first, and by the most dubious means.

CTUF pointed out to supporters that the EU Council of Ministers would be submitting proposals for the provisional application of CETA in June with a final sign-off in October.

But there were big legal and democratic questions to be answered here.

The council said that it was working on the basis that CETA was not a ŌĆ£mixed agreementŌĆØ ŌĆö with authority to ratify ŌĆ£mixedŌĆØ between the EU Commission and the member states ŌĆö and therefore the EUŌĆÖs 28 countries had no part to play in the ratification.

The legal basis for establishing if these treaties are ŌĆ£mixedŌĆØ or not is not due in the Court of Justice of the European Union until 2017 when the court will rule on the Singapore free-trade treaty.

Clearly there is a rush to get the deal done before the court hands down its decision.

This cue offered by the Council of Minsters was taken up by Jean-Claude Junker for the commission and Chrystia Freeland for the Canadians, who both were keen to press ahead without the member statesŌĆÖ involvement.

However, earlier this month, the commission backed down and acknowledged that the 28 member states would have to play a role in ratification.

Seemingly, a great victory for the European alliances of unions and social movements that have made CETA as toxic as TTIP.

But, and this is a big but, the commission says it will ŌĆ£provisionally implementŌĆØ CETA while the member states debate the issue, perhaps over the next two years.

Given that ŌĆ£provisional implementationŌĆØ could allow for almost 90 per cent of the treaty to be made operational prior to ratification, victory on ŌĆ£mixedŌĆØ may turn out to be very pyrrhic.

So, where does that leave Britain post-Brexit?

The facts of the matter are until we leave the EU we are a member of the EU. Freeland for Canada argues that it will take two years for Britain to withdraw from Europe and in the meantime Britain has promised to vote in favour of CETA.

Well, no surprise there, but who has made the promise and will that person will be in the government in October?

Although it probably makes no difference as any of the Tories would presumably sign.

Of course, CETA contains the same investment protection provisions as TTIP and most of the other free-trade deals.

To seal the deal, Freeland is claiming that the investment chapter has been rewritten to strengthen the rights of governments to regulate in areas of the environment, labour standards, public services and a fairer arbitration process.

But that is not true.

Under ICS, cases will be heard by three qualified judges ŌĆö drawn from a panel of 15 who cannot be involved as lawyers in other ICS cases ŌĆö with appeals heard by a bilateral appellate body of six judges. Hearings will be held in public.

But ICS will still give rights to foreign corporations to sue sovereign states in a special transnational court while denying that right to trade unions and citizens.

And which foreign corporations are most likely to take advantage of the right to sue sovereign states? No prizes for guessing: those of the United States.

Eighty per cent of US corporations have subsidiaries in Canada that meet the criteria defining a ŌĆ£substantial business interestŌĆØ and could therefore initiate proceedings against European governments through the ŌĆ£back doorŌĆØ of CETA.

EU-US trade deal TTIP may take much longer to ratify and may not involve Britain, but has Brexit saved us from TTIP?

There is no shortage of right-wing pundits with suggestions for alternatives.

Mathew Lynn, financial columnist on the Daily Telegraph, says that Britain should sign up to Nafta, the treaty that links Canada, the US and Mexico (and scrap EU-mandated labour and social protection as fast as possible).

Republican Congressman Charlie Dent, supported by House of Representatives Speaker Paul Ryan and Senator Ted Cruz, plans to introduce into Congress proposals for a North Atlantic Trade & Investment Partnership (NAFTA) to make up for Britain being outside the EU.

And Michael Froman, the US trade negotiator, has suggested that Britain could join TPP ŌĆö the Trans-Pacific Partnership, which links the US, Japan, Australia and South East Asia.

And of course TiSA is on the horizon, a plurinational treaty aimed a deregulating the service sector. It involves many single countries as well as the EU bloc so thereŌĆÖs no problem for Britain to remain on the inside track.

Brexit will not rid us of CETA and TiSA (or the other more wacky proposals); with Liam Fox appointed as International Trade Secretary we must fear the worst but more importantly maintain the campaigning momentum.