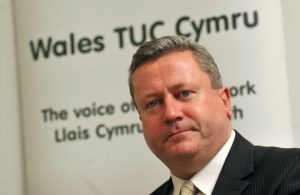 Legislation overturning rules making it more difficult for public sector workers in Wales to take strike action have been passed by the Welsh Government.

The Westminster act came into force in March and stops unions from calling strikes without support from at least 40 per cent of its membership. It also doubled the current notice period for industrial action from seven days to 14 days â€“ Welsh AMs approved a bill by 38 votes to 13.

The Welsh Government’s local government secretary Mark Drakeford said: “This is a very significant day for devolved public services in Wales and devolution as a whole.

“We should never have been in a position where we had to introduce a bill to reverse parts of a UK act. Time and again we warned the UK Government that this damaging and divisive legislation interfered with devolved policy and the powers held by the National Assembly for Wales. Even their own lawyers advised them that they would be on thin ground when it came to this area but they still decided to press ahead.”

He added: “In Wales, the Welsh Government, employers and the trade union movement work together constructively.

“We have built up a tradition of social partnership, founded on respect for the work of trades unions and the rights of their members, and it is a tradition that has served us well, especially when you consider how the UK Government has handled disputes in recent years.

“Today, the National Assembly for Wales has taken the right course of action and acted to protect public services here from this regressive UK act.

“We will robustly defend any attempt by the UK Government to interfere in this legitimate and democratic process.”

The Welsh Conservatives had strongly opposed the bill, which also means agency workers cannot be brought in to cover striking public sector workers in Wales, and speaking before the vote Aberconwy AM Janet Finch-Saunders said approved it would “enable mass disruption for the many by the few”.

“Our government is committed to working in partnership with unions and employers to get the very best deal for our Welsh public services and its valued workforce,” he said.

“Our partnership approach is all about engaging with employers and government at an early stage, allowing us to deal with disagreements before they become disputes through mature negotiation and honest debate.

“Thanks to the support of Welsh Government and progressive political parties in the Senedd, this approach can continue to deliver for both the people of Wales and for the services we all rely on.”