USA: Unions Could Make A Comeback ā If We Help Them 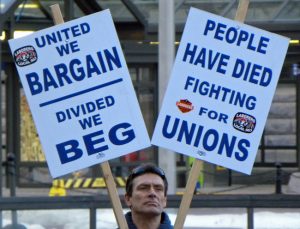 By Michael Wasser, Senior policy analyst at Jobs With Justice

You wonāt hear opponents admit it, but unions are popular and have been for a while. Last year Gallup found that 58 percent of Americans approved of unions. Since Gallup first asked people about their support for unions in 1936, approval dipped below 50 percent just once ā when it dropped to 48 percent at the height of the Great Recession in 2009.

Anti-union advocates prefer to focus on the long-term decline of union membership in the United States, which can suggest that unions are unnecessary or in an inevitable decline. It is true that union density has shrunk from its peak of 35.4 percent of the workforce in 1945 to 11.1 percent in 2015. But the erosion in union membership is not a natural, pre-ordained outcome ā the reality is that intentional policy choices significantly contributed to fewer people becoming union members.

[How employers broke unions by creating a culture of fear]

Benign market forces alone do not explain the continual loss of union membership in the midst of broad support. Take the difference in union density in Canada and the United States: Union membership trends in these similar economies closely tracked each other until the late 1960s and early 1970s. If globalization alone were the main driver of declining union membership, we could expect the countries to have comparable unionization rates. Instead, Canada ā which affords real protections for people coming together as a union ā has more than twice the percentage of people in unions as the United States.

Our country has allowed a broken and outdated labor law to remain in place for too long. Unlike other workplace laws, the National Labor Relations Act lacks meaningful financial penalties for employer wrongdoing, creating an economic incentive for employers to violate the law. Employers routinely influence union elections in their favor through intimidating and coercive tactics. In doing so, employers both regularly break the letter and spirit of the law, often aided by anti-union consultants and lawyers who are paid handsomely to provide advice on how to get away with manipulating the system. The fact is that current law does not offer working people a level playing field, advantaging chief executives set on denying their employeesā right to organize and negotiate together.

Despite the challenges, people continue to want to come together to have a say in their working lives. The last year saw a āwaveā of digital newsroom staff joining in union. Nine thousand American Airlines passenger service agents won their union election in late 2014, doing so in the historically anti-union South. From 2000-2010, the National Labor Relations Board received nearly 3,000 requests for union elections from nursing home and non-acute care employees alone.

Americans are choosing to speak up together at work because they recognize that unions serve as a needed check and balance on corporate power. When working people can negotiate a fair return on their work, they earn higher wages and better benefits. The activism of individuals in unions has a ripple effect across communities. Non-union employees in similar industries and nearby locations generally see their working standards improve. Itās no surprise, then, that the decrease in unions has contributed to the increase in income inequality.

[The incredible decline of American unions, in one animated map]

People also know that joining together is the only effective rampart against the flood of money in a post-Citizens United world that promotes the agenda of the wealthy few. Unions have proven to be the singular political force that can speak up for the betterment of everyday people, regularly advocating for expanded access to affordable health care, improved class sizes in our schools, investments in infrastructure, the protection of Social Security and Medicare, safer patient care and a fairer tax code.

Unions of working people led the national conversation about raising the minimum wage, making wage stagnation and inequality a national priority. Unions even played a key role in defending the Obama administrationās update to our overtime rules from political attacks. The new rule will significantly increase the number of people who qualify for overtime protections by raising the annual salary threshold from $23,660 to $47,476, improving the lives of supervisors as much, if not more so, than people who are or could potentially be union members.

The reason for the difference between the high numbers of support for unions and the number of actual union members is not so paradoxical. We can narrow the gap between these two statistics by modernizing our labor law, establishing real financial penalties to end employer retaliation and ensuring every personās workplace rights are protected. Doing so will give Americans a fair shot at coming together to negotiate for a better life for themselves and their families.