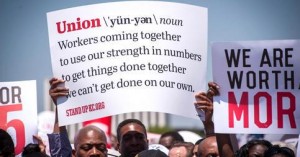 Photo: Courtesy of the SEIU

The US National Labor Relations Board is implementing a very significant new rule that will limit employer retaliation, terminations, and interference when workers seek to form a union in their workplace.

It is long overdue and not enough, but still very important.

The new rule will shorten the time workers have to wait to vote for union recognition and representation.

The new rule will also drastically shorten the time employers have to retaliate and terminate workers in a union effort.

The time between when workers ask for union recognition and representation till when a vote is held will be shortened from the usual 45 days to two weeks or less.

This is a rule change I called for when legislation called the Employee Free Choice Act failed in 2009, even though the President and both Houses of Congress supported it.

The Employee Free Choice Act failed, because we could not overcome a Republican filibuster with the illness and deaths of Senators Kennedy and Byrd.

I directed the labor movementâ€™s national campaign for the passage of the Employee Free Choice Act. When we failed to defeat the Republican filibuster, I called for employer retaliation and terminations to be mitigated by rule change under the Obama Administration.

I was skewered by the right-wing media for seeking a rule change when workers sought the freedom to organize.

It was our national campaign for the Employee Free Choice Act that led directly to this major victory.

Employers use all kinds of intimidation to frustrate workersâ€™ unionization attempts. They fire worker leaders. EmployersÂ  threaten to close or move the worksite, change workersâ€™ shifts so they cannot be with their families, lay off people, shorten work hours, and much more.