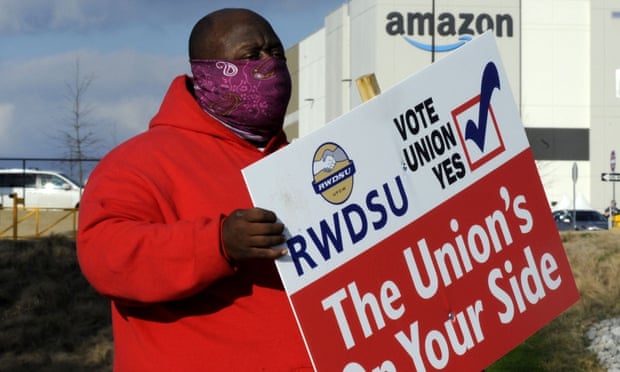 The ballot of workers at Amazon in Bessemer, Alabama is one of the highest profile union recognition ballots carried out in recent times in the USA. Ballots are expected to begin being counted today with the count possibly lasting days. Thousands of workers from the facility in Bessemer have taken part

The ballot will determine whether warehouse employees will become the first group to unionise among AmazonŌĆÖs 800,000 U.S. workers.┬Ā

The US National Labour Relations Board, is in charge of the election, and they have indicated that the ballot e counting process could ŌĆśtake daysŌĆÖ partly because both parties can dispute votes. ┬Ā

Results are usually declared quickly but the Covid-19 pandemic meant the election was held by postal vote and the board officials will have to sort through any ballots that are challenged by the parties and count each ballot by hand, with the total count expected to be in the thousands.

Amazon has across hundreds of facilities in the USA. Workers have have complained about about gruelling workload the company monitoring process of employees through an internal tracking system and CCTV cameras.

Ballots were mailed to 6,000 employees.and even if workers vote to unionise, under the US system it could ta long time for the union to secure┬Ā a first contract . Either side could also contest the results of the election.

Amazon has a record of anti unionism. In 2018 it defeated a union campaign at its┬ĀWhole Foods Market business and number of maintenance and repair technicians voted against a union at a Middletown, Delaware facility.

During the Whole Foods campaign, Amazon used a training video to coach Whole Foods staff on how to spot organising efforts. The company has said this video is no longer in use.

Last year Amazon postedŌĆöand removedŌĆöjob listings for analysts that included descriptions on monitoring union-organizing threats. Amazon has said the postings werenŌĆÖt an accurate description of the roles and were made in error.

Union organizers were present on a daily basis at the site, talking to workers, handing out leaflets and phone calling workers. The union also launched an information website and sought to garner support by rallying employees through family members and union members who work in other industries.

┬ĀAmazon have retaliated with a website┬Āto encourage workers to vote against a union. Signs were posted around the facility, and managers initially held frequent one to one meetings with workers.┬Ā

The companyŌĆÖs messaging and tactics amount to was classic US union busting techniques centered around the cost of union subscriptions with Amazon saying that a union is unnecessary because its workers receive better pay and benefits from the company than they would in other comparable jobs. Amazon hasnŌĆÖt made as clear to workers, however, that Alabama is a ŌĆ£right to workŌĆØ state, meaning employees would have an option on whether to be union members and pay dues.

Meanwhile in Germany the Ver.di union has called on Amazon workers at six Amazon sites ito go on strike this week for four days in the latest attempt to try to force the company to recognise collective bargaining agreements under German law.

Ver.di said the strikes at AmazonŌĆÖs sites in Rheinberg, Werne, Koblenz, Leipzig and at two locations in Bad Hersfeld signalled an ŌĆ£unofficial startŌĆØ to wage talks for the retail and mail order industry, which are due to begin in the next few weeks.

ŌĆ£Amazon is making a mint in the coronavirus crisis. For this reason alone, wage evasion must be stopped there,ŌĆØ said Ver.di union representative Orhan Akman.

Verdi is demanding a pay increase of 4.5% for workers in the retail and mail order industry. ŌĆ£This must also be possible at Amazon this year,ŌĆØ Akman said.

Amazon is facing a long-running battle in Germany over better pay and conditions for logistics workers, who have frequently staged strikes since 2013.┬ĀGermany is AmazonŌĆÖs biggest market after the United States.