US Unions To Run Campaign On Fast Track Trade Deals 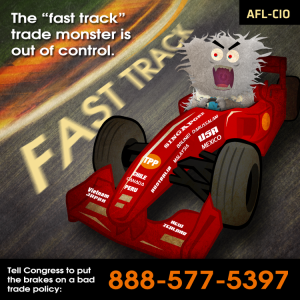 US unions have launched a four week advrtising campaign against ŌĆśFast TrackŌĆÖ trade legislation. Unions┬Āincluding the United Steelworkers; the United Autoworkers; public service workers (AFSCME); the Machinists Union, (IAMAW); the communications workers union (CWA), as well as the AFL-CIO union umbrella body began the four week campaign which is designed to ensure that the US Congress do not undermine an already fragile economy by moving forward with any form of Fast Track trade agreement laws.

The AFL-CIO said that ‘Fast Tracking’ trade deals sets the USA on a path to concluding any trade deal that would take policy making out of elected politicians – who has to answer to the voters, and turn it over to trade arbitrators who favour corporate interests over the public interest.

Richard Trumka President of the AFL-CIO said: ŌĆ£Fast Track is a misguided and undemocratic policy that advances the corporate trade agenda and bad deals like NAFTA, CAFTA, and the Korea FTA. Congress must end the secrecy and create a new process to develop and implement trade, investment and economic policies that will promote good jobs, rising wages, a clean environment and a fair economy for us all.┬Ā AmericaŌĆÖs workers simply canŌĆÖt afford more Fast TrackŌĆØ

ŌĆ£We will not stand by while fast track paves the way for another secretly negotiated trade┬Ā deal┬Ā that will cost┬Ā hundreds of┬Ā thousands of U.S. jobs by making it easier for U.S. corporations to flee our shores,ŌĆØ said International Association of Machinists and Aerospace Workers (IAM) President Tom Buffenbarger.

Meanwhile Lee Saunders, President of the American Federation of State, County & Municipal Employees said: “Trade agreements should not be designed to limit the ability of governments to implement and enforce laws that regulate business and protect our food, our environment, worker safety and the public’s health”.

Saunders also highlighted TTIP: “TPP would allow global corporations to challenge U.S. laws through secret, unaccountable and undemocratic, international trade tribunals that do not have to adhere to U.S. law or even abide by the U.S. Constitution when making decisions that impact U.S. citizens or companies. Fast Track would set the U.S. on a path to concluding a trade deal that would take policy-making out of the hands of anyone who has to answer to the voters, and turn it over to trade arbitrators who favor corporate interests over the public interest.”