Update On Strike In Matamoros, Mexico 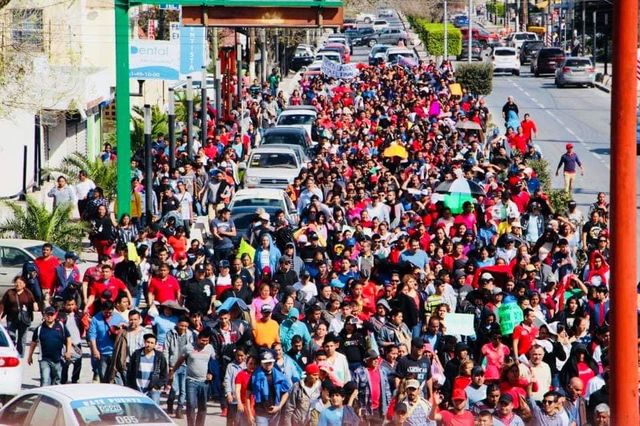 At 2 p.m. Friday, 30,000 workers in 41 factories represented by the Union of Laborers and Industrial Workers of the Maquiladora Industry (SJOIIM) in Matamoros went on strike.

The workers are demanding a wage increase of 20% and √•a bonus of 32,000 ($1600) which is roughly equivalent to the 100% minimum wage increase implemented by the federal government. Many of the union contracts have language that requires any increase in the minimum wage to be applied to the entire pay scale (not just those at the bottom). The contracts also contain a daily productivity bonus which was negotiated in 2015 in place of a wage increase. The union rejected an offer of 10% and 10,000 pesos ($500) on Thursday.

One group of workers is being supported by Los Mineros, who represent two plants in Matamoros. A video of a meeting between Javier Zu√±iga, the Mineros representative in Matamoros, and the the CTM union leader, Juan Villafuerte, shows the pressure by workers on the CTM union to reject the employers‚Äô demands. Another group is being advised by Susana Prieto, a labor lawyer from Ciudad Ju√°rez.

Federal Labor Secretary Luisa Alcalde made a public request for dialogue, and the Federal Under-Secretary of Labor, Alfredo Dominguez, is now involved in the discussions. On Friday morning the union rejected his request for a 10 day extension of the negotiations.

Media report that in some plants (Trico, Inteva, Albea Cepillos de Matamoros, ATD) management ordered security guards to block the doors to prevent workers from leaving at the end of their shift. At Parker Hannifin and Candados Universales, workers blocked attempts by management to remove machinery, and groups of workers formed outside other factories to prevent any similar attempts.