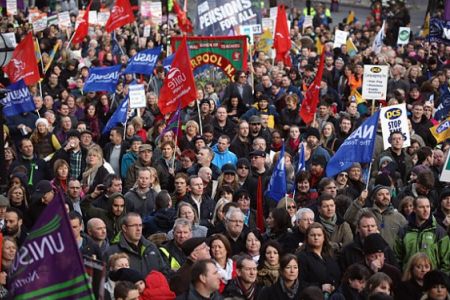 The latest trade union membership figures and statistics published by the Department of Business, Innovation & Skills (BIS) in its statistical bulletin shows union membership for 2014 in the UK is ŌĆśbroadly unchangedŌĆÖ on the figures for 2013.

The report shows that 6.4 million employees in the UK are union members. ŌĆ£The level of overall union members was broadly unchanged from 2013, with a non-statistically significant reduction of only 40,000 over the year (a 0.6% decline)ŌĆØ says the bulletin.

The report describes the increase of 38,000 in 2013 to 2.7 million as ŌĆ£non-statistically significantŌĆØ.

Equally, employees in permanent jobs and full-time work are more likely to be union members.

The trade union premium known as ŌĆ£trade union wage gapŌĆØ, (defined as the percentage difference in average gross hourly earnings of union members compared with non-members), is 21.6% in the public sector and 8.1% in the private sector. This is an increase of 1.7 and 0.9 percentage points respectively when compared with 2013.

Which shows it pays to be in a union.