UAW Files Objections To Outside Conduct In VW-Chattanooga US Vote 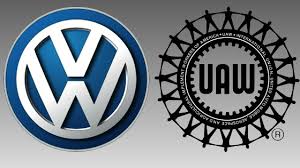 By Dick Blin in the USA

The UAW in the USA is challenging a new phase of crushing US labour law impediment – outside political interference to organising.

The United Auto Workers (UAW) has filed objections in the US with the National Labor Relations Board (NLRB) over the underlying and deviant behaviour by politically elected officials in last weekâ€™s Volkswagen unionisation vote in Chattanooga, Tennessee. The UAW lost the representation election, 626-712, but despite Volkswagenâ€™s neutrality and granting UAW right of access to the plant â€“ an anomaly in such US labor cases â€“ Tennessee politicians inexplicably interfered in the process, and now might have jeopardised future VW expansion in Chattanooga.

Republican Party elected officials in Tennessee â€“ the stateâ€™s Governor, Bill Haslam; US Senator, Bob Corker; and an influential state senator, Bo Watson â€“ all heartily joined right-wing lobbying groups invading Chattanooga to thrash the UAW and crush the 22-page neutrality agreement worked out by the UAW and Volkswagen, with assistance by IG Metall of Germany.

The NLRB now takes up a rare legal question under US labour law; whether or not coercive threats and fabricated information from elected political officials tainted the â€ślaboratory conditionsâ€ť intended for US union representation elections. In objecting to outside interference in the 12th -14th February vote, the UAW stated, the â€śmessage of (this) campaign was that voting for the union would result in stagnation for the Chattanooga plant, with no new product, no job security, and withholding of state support for its expansion.â€ť

During the critical period prior to the vote, Watson, a member of the state senateâ€™s Finance and Ways and Means Committee, stated a vote for the UAW will mean state-subsidized â€śincentivesâ€ť for VW expansion in Chattanooga â€świll have a very tough time passing the Tennessee senate.â€ť Corker, a former mayor of Chattanooga who publicly campaigned against the UAW for two years, announced in the days prior to the vote that he would stop his anti-union rhetoric, allowing the plant-site vote to occur in an unencumbered manner.

But on the voteâ€™s first day, 12 February, he broke from that by falsely and publicly boasting that a â€śnoâ€ť vote would see VW â€śannounce in the coming weeksâ€ť expansion of Chattanooga for the new mid-size SUV line.Â  AÂ  VW senior manager in Germany had to rebut Corkerâ€™s statement.

â€śForty-three votes was the difference,â€ť said UAW Sec.-Treas. Dennis Williams at a press conference following the vote. â€ś â€¦ itâ€™s very disturbing when this happens in the United States of America when a company and union come together to have a fair election process.â€ť

The NLRB will now review UAWâ€™s objections, and could nullify the mid-February election and order a relatively quick re-vote. Under US labour statute, the UAW can also re-petition the NLRB in one yearâ€™s time for another vote at the five-year-old Chattanooga plant on behalf of union-interested workers.