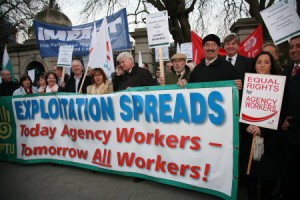 The TUC has today (September 2nd) lodged a formal complaint with the European Commission against the UK government for failing to implement the Temporary Agency Workers Directive properly, leading to tens of thousands of agency workers being paid less than permanent staff despite doing the same job.

¬ÝThe TUC has gathered evidence from workplaces where agency staff are paid up to ¬£135 a week less than permanent staff, despite working in the same place and doing the same job.

¬ÝUnder the UK‚Äôs regulations, agency workers are entitled to the same pay and conditions as permanent staff doing the same job after 12 weeks. However, a Swedish derogation contract exempts the agency from having to pay the worker the same rate of pay, as long as the agency directly employs individuals and guarantees to pay them for at least four weeks during the times they can‚Äôt find them work.

¬ÝIn Sweden, where these contracts originate, workers still receive equal pay once in post and 90 per cent of normal pay between assignments. However in the UK workers have no equal pay rights and are paid half as much as they received in their last assignment, or minimum wage rates, between assignments. Agencies can also cut their hours, so receive as little as one hour of paid work a week.

¬ÝThe Temporary Agency Workers Directive was implemented in the UK in 2011 as part of Europe-wide legislation to give equal treatment to agency workers. At the time, business lobby groups warned that the legislation would lead to heavy job losses. But as with the minimum wage, their predictions proved to be completely wrong, and the number of agency workers has increased despite the recession.¬Ý Agency working in the UK has increased by 15 per cent since the recession, faster than any other form of employment.

¬ÝThe number of workers on Swedish derogation contracts has grown rapidly since 2011. Around one in six agency workers are now on these contracts, according to a report from the Recruitment and Employment Confederation.

¬ÝEmployer organisations are often keen to praise the flexibility of these employment contracts but the reality for many thousands of workers is job insecurity, a lack of basic rights at work and, in the case of many agency workers, pay rates far below that of colleagues who have permanent contracts, says the TUC.

¬ÝThe TUC believes that the growing exploitation of agency workers on Swedish derogation contracts, along with the rise of zero hours contracts and involuntary temporary work, show that behind improving employment statistics lies an increasingly insecure and vulnerable workforce. Unless the government acts to protect workers, the jobs market will continue to be dogged by low-wage, insecure jobs, says the TUC.

‚ÄúHowever, the regulations are being undermined by a growing number of employers who are putting staff¬Ýon contracts that deny them equal pay. Most people would be appalled if the person working next to them was paid more for doing the same job, and yet agency workers on these contracts can still be treated unfairly.

‚ÄúWhen even Conservative MPs complain about the ‚ÄòSwedish derogation‚Äô you know it is time for the government to toughen the law. That‚Äôs why we are calling on the European Commission to investigate the problem and take steps to prevent the abuse of agency workers in the UK.

‚ÄúSwedish derogation contracts are just one more example of a new growing type of employment that offers no job security, poor career progression and often low pay. People are often unable to plan and budget from one month to the next, energy bills are a struggle and home ownership is a pipe dream.

‚ÄúThe government should ignore the inevitable bleating from business that will follow the TUC‚Äôs complaint and finally do something to help ordinary workers.‚Äù

Note: According to edition 8 (page 5) of the Recruitment and Employment Confederation‚Äôs¬Ý report AWR Monitor the number of people who were paid by agencies between assignments, an employment model that uses the Swedish derogation, increased from 12 per cent to 17 per cent following the introduction of the agency worker regulations.¬Ýwww.rec.uk.com/_uploads/documents/1awr-monitor-8th-edition.pdf¬Ý ¬Ý