TU Bill : Packed Meeting Says We Must ‘Kill The Bill’ 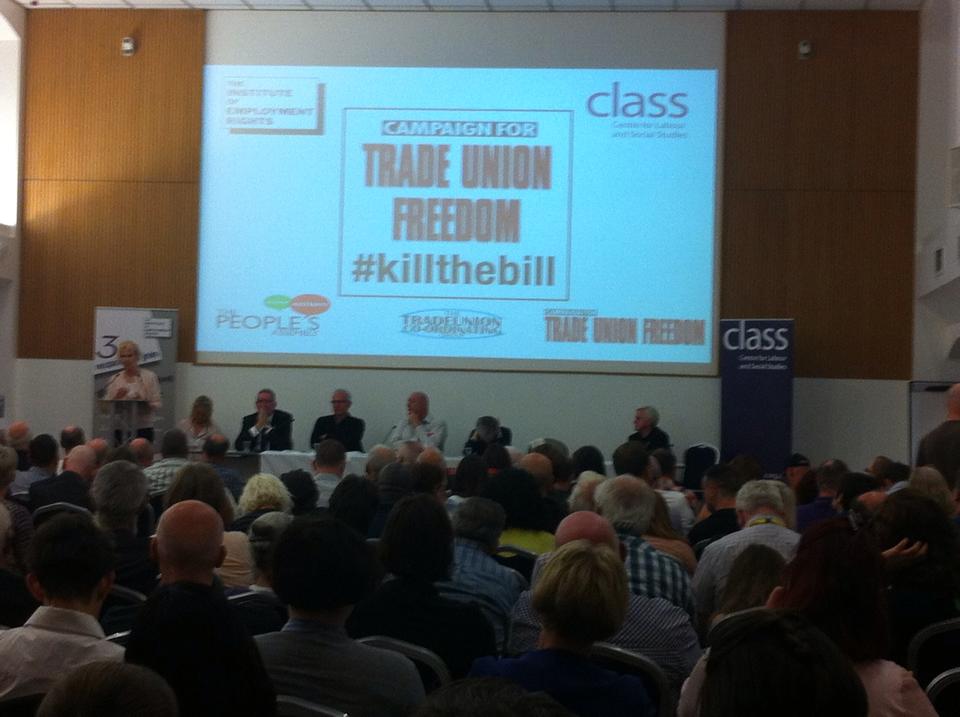 There has never been a more important time to mobilise, was the consensus of a public meeting organised to call for trade union unity against Tory attacks on their civil liberties.

The Tory government,ô through its trade union reform bill isô attempting to silence the trade union political voice and to smash their industrial power in the biggest attack on trade unions and industrial action in 30 years.

Under the proposals the Tories plan to:

Trade unions, MPs and labour movement organisations came together at the packed meeting on 29th July – it was standing room only – at the NUTãs Mander Hall in central London last night to question the legislation and discuss how to intervene to try to stop the bill but also what must be done if the bill becomes law. Speaker after speaker was keen to stress that there must be unified resistance to the bill and that far from being irrelevant trade unions are too important and their support too strong for the attacks to succeed.

PCS general secretary Mark Serwotka was among the speakers at the meeting organised byô the Institute of Employment Rightsô (IER) together with theô Campaign for Trade Union Freedomô (CTUF) and theô Centre for Labour and Social Studiesô (CLASS).

Mark told the meeting of more than 1,000 people that we all have to mobilise against the bill.

“We have to debate what we are going to do if this bill becomes law,” he said.

“The first strike when they try to break a picket we should bus in tens of thousands of people.”

Unite general secretary Len McLuskey told the packed hall how, if needs be, the unions will have to break the law to oppose Tory attacks on trade union rights.

“The time for rhetoric will quickly disappear. Our moment is here. And if necessary we will need to defy the law,” he said.

John McDonnell MP, chair of the PCS parliamentary group, said the secret of success in fighting the government is solidarity.

“Those who protested at Canary Wharf toô get that construction worker (Graeme Smith) his job backô – that’s how to fight,” he said.

There was rapturous applause for sacked PCS National Gallery rep Candy Udwin as she got up to speak to outline how she and members at the gallery hadô taken more than 50 days’ strike action against privatisation and were preparing to keep fighting.

Chair of the IER, John Hendy QC, was clear that the bill would not be defeated by lawyers. “The trade unions must mobilise as in the past,” he said.

Unison general secretary Dave Prentis was unequivicol about challenging the bill: “This bill is an attack on democracy. The whole trade union movement have to sign up in blood to oppose this bill.

“If we don’t kill this bill through parliament we must go to European courts.”

Speakers urged everyone to join theô TUC rally at the Tory Party conference in Manchester on 4th Octoberô and the anti-austerity demonstration outside parliament on the day ofô the spending review on 25th Novemberô when the government outlines a further ôÈ20 billions of cuts.