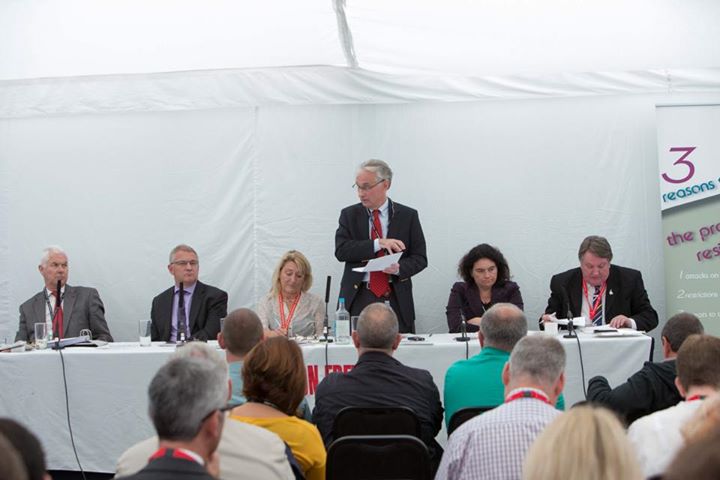 TodayŌĆÖs meeting has been called on the topic of a post-election agenda but we will need to watch out as these free trade deals may be signed before May next year.

┬ĀIt is our contention that the so-called free trade treaty ŌĆō TTIP ŌĆō being secretly negotiated between the EU and the US is the biggest grab for wealth and power by the corporate sector since and is nothing more than turbo charges capitalism.

Dealing particularly with labour rights – earlier this year the General Secretaries of the ETUC and the AFL-CIO issued a joint statement arguing that if TTIP doesnŌĆÖt work for people then it wonŌĆÖt work at all.

And the Americans should know what theyŌĆÖre talking about because when the NAFTA free trade agreement was signed there was mass migration of American manufacturing to the maquiladora, south of the border in Mexico.

However, there are real problems with developing a common narrative on labour rights.

In the US half of the states are ŌĆ£right to workŌĆØ states in other words, they try to be union free and strike free and they have legal support for this. Our American colleagues are looking for TTIP to extend to the US Euro-style rights to information and consultation.

It remains a moot point however, if the labour chapter of a treaty would have universal applicability in all 50 states and our good friend Ben Davis from the United Steelworkers said at the TUC fringe on TTIP that the US would not ratify the ILO core conventions ŌĆ£in our lifetimeŌĆØ.

And in any event, a large majority of US Republicans in Congress have said that if TTIP is sued to smuggle in Euro style labour rights to the US they will vote against it.

From our own, European perspective there are serious issues on labour rights ŌĆō the European Commission has said that it will take as its starting point the core ILO standards.

This would be a great step forward for workers in many jurisdictions in the EU, not just the UK but also in the former socialist states of eastern and central Europe.

But looking at this just from the UK ŌĆō how likely is that David Cameron would sign up to a treaty that gave to British workers and their unions enforceable rights as per ILO standards when the last Tory Government under Mrs Thatcher very deliberately, but without renouncing the Conventions, took the UK workers out of such protection?

It seems to us that the enforceable labour rights issue is a red herring ŌĆō itŌĆÖs undeliverable ŌĆō which coupled with the huge grab for power by the corporate sector has led Unite and the TUC to move to a position of opposing TTIP, root and branch.

IŌĆÖd like to turn the other issue that had the potential to inflict great legal damage on the unions ŌĆō the Carr Report.

The terms of reference of the Carr Inquiry were to provide an assessment of the:

alleged use of extreme tactics in industrial disputes, including so-called ŌĆśleverageŌĆÖ tactics; and the

┬Āeffectiveness of the existing legal framework to prevent inappropriate or intimidatory actions in trade disputes.

┬ĀIn advance of Carr reporting, the Prime Minster announced in May 2014 that new restrictions will be introduced on strikes in `essential’ services if the Conservatives were to win the 2015 general election.

┬ĀThe Conservatives said that they would seek to legislate in two areas:

that there should be a threshold for the turnout in an industrial action ballot that must be reached; and,

placing a time limit on the legality of a mandate a union has to call industrial action.

In August, clearly worried by these pre-emptive policy announcements made by the Conservatives on how they were to legislate against the unions after the next General Election Bruce Carr threw in the towel and said he would be making no recommendations.

The Carr Review has been a shambles and last week Frances OŌĆÖGrady of the TUC wrote to the Public Accounts Committee demanding an investigation into how much this waste of time has cost the public purse, including civil service time and the cost of setting up and servicing what was a political stunt.

Comrades: In the run up to the General Election the TUC has set out a four point campaign ŌĆō Respect at Work ŌĆō on employment rights that it hopes will inform the debate. The four elements are:

stemming the tide of casualisation – including ending the abuse of zero hour contracts and, equal pay for agency workers

a new framework of employment rights – including reversal of the coalition attack on statutory redundancy and TUPE and, unfair dismissal protection from day one

ItŌĆÖs this last point that the Campaign and the Institute are most excited about and we look forward to developing ideas for legislation in the months to come.