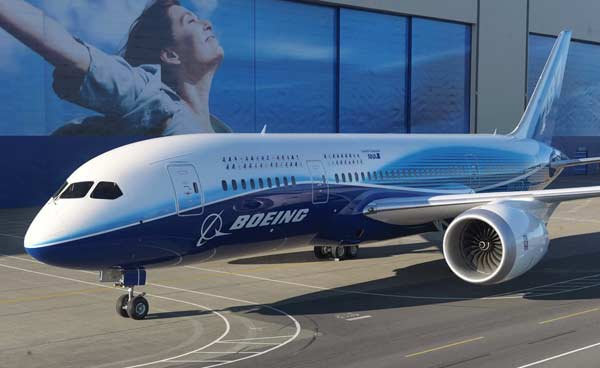 Following on from the good news of the withdrawal of his nomination for US Labor Secretary by Andrew Pudzer, US unions suffered a setback when workers at Boeing‚Äôs South Carolina plants voted against recognition of the International Association of Machinists and Aerospace Workers union following massive pressure and a fierce anti union campaign by the company and local politicians. 74% of 2800 workers voted against the union. South Carolina is one of the least unionised states in the USA.

US President Donald Trump is expected to appear at the plant today celebrate the rollout of the first 787-10 jet liner, the largest version of the Boeing Dreamliner.

The vote came two years after the Machinists union had called off a vote at the South Carolina facilities following widespread misinformation and ‚Äòunrelenting pressure from local politicians‚Äô.

The Machinists union were confident that this time workers would vote for a union citing management‚Äôs unfair approach to evaluating staff, pay raises and promotions.

Workers complained that instructions on performing their jobs changed from month to month. Production and maintenance workers in South Carolina, make $23 per hour on average, compared to about $31 per hour for comparable workers in Washington State.

Boeing‚Äôs efforts to defeat the union organising campaign proved too strong. The company using well tested anti union messages implied to workers that a union would drive a wedge between them and management and they also used the machinists‚Äô union‚Äôs opposition to its 2009 decision to open a second Dreamliner assembly line in South Carolina.

The union back then had argued that opening the plant would undermine the protected right to strike of tens of thousands of Boeing workers in Washington State, and the machinists filed a charge against the company with the National Labor Relations Board.

Opponents of unionisation also ran a series of adverts opposing the union, including one depicting the machinists union as a casino boss who wanted workers to gamble away their future.

Critics of the union say they rushed the campaign to unionise the S.C. sites before Trump could appoint two new members to the N.L.R.B., which would give Republicans a majority on the board.

Mike Evans, the lead organizer for the machinists‚Äô union, said the union had moved to hold the vote ‘because it believed it had finally built sufficient support among workers’.

The N.L.R.B.’s make-up will be a factor in future organizing campaigns as a Republican board could undo rules enacted in 2015 to expedite the union election process, a move widely viewed as helping organizers.