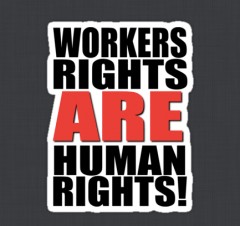 Just before Christmas, the┬ĀLiaison Committee for the Defence of Trade Unions and the Campaign for the Repeal of the Anti-Union Laws merged to launch a new organisation to campaign for trade union rights,┬Āthe Campaign for Trade Union Freedom (TUF). Its launch rally is being held on 23rd March at Friends House, London at 1:30 pm.

The past 30 years have been marked by growing income inequality, in other words the already wealthy have got richer and share of national income going to the sorts of people represented by trade unions has diminished. The key facts correlated with this growing inequality are:

In other words a vibrant framework of collective bargaining conducted by strong trade unions is correlated with higher levels of income equality.┬ĀThis was the sort of system that we had in the UK up until the end of the 1970s. By the end of the 1970s, income disparity was at its lowest recorded level. But collective bargaining can only be carried out if the employeesŌĆÖ side has some sort of equity in the bargaining relationship; this equity is expressed through strong trade unions.

From 1980 the Conservative Governments led by Margaret Thatcher and John Major passed a series of laws which:

It is from this point, the beginning of the 1980s when these new laws started to be introduced, that we see the decline in union membership and scope of collective bargaining accompanied by the growth in income inequality.

What did the Last Labour Government do?

Under the slogan of Fairness at Work Peter Mandleson introduced the Employment Relations Act 1999, as amended, which allows for:

However, Labour under Tony Blair and Gordon Brown chose not to undo the bulk of the negative changes made by the preceding Conservative Government.

The right to be a union member, to have your union bargain collectively on your behalf and the right to strike if the bargaining process breaks down have all been recognised in many international treaties ratified by the United Kingdom.

On 10th December, 1948 the General Assembly of the United Nations adopted and proclaimed the Universal Declaration of Human Rights. Article 23 (4) of which says: ŌĆ£everyone has the right to form and to join trade unions for the protection of his interestsŌĆØ.

The International Labour Organization (ILO ŌĆō a specialist agency of the United Nations that deals with industrial relations and employment issues) published ILO Convention 87 on Freedom of Association and Protection of the Right to Organise in 1948 which was ratified by the UK on 27 June, 1949. ILO Convention 98 on the Right to Organise and Collective Bargaining was published in 1949 and ratified by the UK on 30 June, 1950.

ILO Conventions have the same legal standing as international treaties.

The European Court of Human Rights, established by the Convention, has shown in 2008 and 2009 in two cases involving the Turkish Government (Demir & Baykara v Turkey and Enerji Yapi-Yol Sen v Turkey) that trade union rights are human rights and that there is indeed an internationally protected right to bargain collectively and to strike ŌĆō small wonder that the constant cry from the Conservatives is that the UK should withdraw from its treaty obligations on human rights!

Articles 5 and 6 of the European Social Charter of 1961, ratified by the UK, say very much the same as ILO Conventions 87 and 98 on the right to organise and bargain collectively with Clause 4 of Article 6 explicitly recognising that workers have a right to strike.

As does Article 28 of the Charter of Fundamental Rights of the European Union 2000 ŌĆ£workers ŌĆ” or their ŌĆ” organisations, have, in accordance with Union law and national laws and practices, the right to negotiate and conclude collective agreements at appropriate levels and, in cases of conflicts of interest, to take collective action to defend their interests, including strike actionŌĆØ.

The case for free trade unions is unanswerable ŌĆō but we need to make the case for a new legal framework heard!

Firstly, we have the international legal rights ŌĆō but theyŌĆÖre mainly honoured in the breach.

Be part of the new campaign; make sure that you are at Friends House on 23rd March.