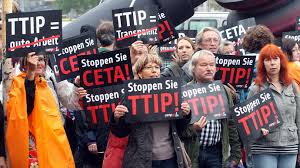 Sent to us by Ben Davis of the United Steelworkers.

¬†In 2004, the Pacific Rim mining company applied to dig for gold in El Salvador. Pacific Rim (since acquired by the Canadian-Australian company OceanaGold) assured the government of then-President Antonio Saca that its work would be eco-friendly and would generate jobs. But with 90 percent of the country‚Äôs surface water contaminated, and fearing damage to the Lempa River ‚ÄĒ an essential source of water for El Salvador‚Äôs 6 million people ‚ÄĒ the administration failed to approve the proposal. In 2008, Mr. Saca instituted a moratorium on new mining permits; to date, this has been maintained and is widely popular.

Pacific Rim fought back in 2009, filing a $77 million lawsuit with the International Center for Settlement of Investment Disputes (Icsid), a World Bank-affiliated institution in Washington that facilitates arbitration between governments and investors. The case was brought under a 1999 Salvadoran investment law, according to which foreign companies could take the Salvadoran government to international arbitral tribunals.

Pacific Rim raised its suit to $301 million and the final Icsid hearing opened in September; a verdict is expected in 2015.

International arbitration is considered by its proponents to be relatively objective. Indeed, over 150 nations have consented to arbitration at Icsid. But corporations are increasingly using investment and trade agreements ‚ÄĒ specifically, the investor-state dispute settlement provisions in them ‚ÄĒ to bring opportunistic cases in arbitral courts, circumventing decisions states deem in their best interest. And now investor-state dispute settlement provisions may be enshrined in two new treaties: the Transatlantic Trade and Investment Partnership and Trans-Pacific Partnership, currently under negotiation between, respectively, the United States and the European Union, and the United States and 11 Asia-Pacific nations. If the final agreements contain these mechanisms, we can expect a flood of cases like Pacific Rim v. El Salvador.

Today, countries from Indonesia to Peru are facing investor-state suits. Mexico and Canada have lost or settled five each under Nafta, paying hundreds of millions of dollars to foreign companies. In the largest award to date, Icsid in 2012 ordered Ecuador to pay $1.77 billion to Occidental Petroleum for canceling its contract with the corporation. And this October, it ordered Venezuela to pay $1.6 billion to Exxon to compensate for nationalising¬†oil¬†projects. Nearly 200 disputes are pending at Icsid alone.

American and European claimants have brought 75 percent of recent investor-state cases, according to the United Nations Conference on Trade and Development. Unsurprisingly, Washington seeks to include investor-state-dispute provisions in the Transatlantic Trade and Investment Partnership and the Trans-Pacific Partnership.

But opposition is growing. The European Commission president, Jean-Claude Juncker, refuses to accept that European courts ‚Äúbe limited by special regimes for investor-to-state disputes.‚ÄĚ Sigmar Gabriel, Germany‚Äôs vice chancellor and economy minister, has warned of states seeing ‚Äúpolicy objectives circumvented by the threat of damages.‚ÄĚ Last month, the French trade minister, Matthias Fekl, too, came out strongly against investor-state settlement provisions: ‚ÄúWe must preserve states‚Äô rights‚ÄĚ to ‚Äúset and apply their own standards,‚ÄĚ he told the French Senate. British politicians have made similar statements amid fears that such cases could solidify the increasing privatization of Britain‚Äôs national health service.

Such thinking is not unfounded, particularly concerning environmental policy. In 2012, the Swedish energy company Vattenfall sued at Icsid following Germany‚Äôs decision to phase out¬†nuclear energy; though figures have not been made public, it allegedly claims billions from Berlin in compensation for shuttered power plants. And modification of a single set of regulations can trigger a flurry of litigation: In the Czech Republic, one change in energy policy yielded seven claims in 2013; in Spain, six.Investor-state dispute provisions need not be extended in new treaties.

The European Union should continue to demand the removal of these provisions from the TTIP¬†They must also be expunged from the TPP.¬†For El Salvador, a $301 million loss ‚ÄĒ just under 2 percent of its GDP¬†‚ÄĒ would significantly reduce funds available for health care and education. And even if Pacific Rim‚Äôs claim fails, as many expect, the suit has cost El Salvador almost $13 million to date ‚ÄĒ which amounts to nearly its entire environment and natural resources spending in 2013. Venezuela, Ecuador and Bolivia have officially denounced the Icsid convention. Though El Salvador likely fears a retraction of Washington‚Äôs substantial financial assistance if it withdraws, it should consider doing so as well.

The investor-state dispute settlement mechanism is like playing soccer on half the field. Corporations are free to sue, and nations must defend themselves at enormous cost ‚ÄĒ and the best a government can hope for is a scoreless game. As the TTIP¬†and TPP¬†negotiations continue, Pacific Rim vs. El Salvador should remind us not to privilege foreign investors to the detriment of the national ‚ÄĒ or global ‚ÄĒ good.

Manuel P√©rez-Rocha is an associate fellow at the Institute for Policy Studies in Washington.