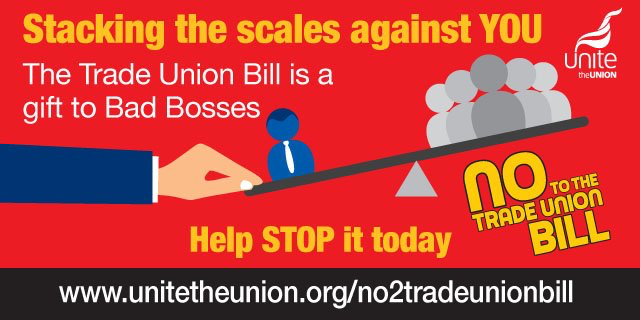 As the new anti-union legislation pushed through by the Conservative Party will the UKs biggest union Unite said it would continue to support working people seeking justice.

Speaking the Trade Union Act comes into law Len McCluskey announced regional dispute teams to ensure that not one member will be denied the justice or support they need, as the regressive new rules impose higher thresholds for industrial action ballots and attack trade unionsŌĆÖ ability to campaign.

This follows the unionŌĆÖs rule change to ensure that it can take action to defend members even if forced outside the law by this Act, in addition to the establishment of a ┬Ż35 million strike fund to support members through disputes.

The Act, which seeks to tie unions up in red tape and administration costs, as well as erecting barriers to the fundamental right to strike – has been derided as ŌĆśnot fit for purposeŌĆÖ by the governmentŌĆÖs own regulator and denounced as ŌĆśneedlessly ideologicalŌĆÖ by former business secretary, Vince Cable.

Commenting Unite general secretary Len McCluskey said: ŌĆ£This is a dark day for basic rights in this country. Once again, Conservative laws are a gift to the bad bosses as they make it harder for working people to get a fair hearing. They have priced working people out of the tribunal process and now they want to intimidate their unions into inaction.
┬Ā
ŌĆ£Well, that is not going to happen at Unite. There is no way that this union will allow a Conservative or any other government to further stack the dice against working people.
┬Ā
ŌĆ£Unite has already organised itself to be able to see off these attacks and to ensure that our members will be defended to the hilt when they need to be.┬Ā Our rules have been changed to ensure that we can defend members even when the law has been twisted to prevent this, and our ┬Ż35 million strike fund ensures that no Unite member will ever be starved back to work. Added to this our regional dispute teams will provide the rapid and expert support workers need when faced with trouble in the workplace.
┬Ā
ŌĆ£The Conservative party is fundamentally wrong in how it treats union members.┬Ā There are six million of us, all with families and friends, so our reach is far further.┬Ā We are not the `enemy withinŌĆÖ. We are the people who care for our sick, our children and our communities, who keep our shops shelves stacked, keep our country defended and the lights on.
┬Ā
ŌĆ£The anti-worker legislation being brought in today is a disgraceful way to treat decent people.┬Ā Today, sadly, this county, thanks to the Tories, takes a massive step backwards into becoming a more unequal nation.ŌĆØ