The Tories Are Making All But Impossible To Strike 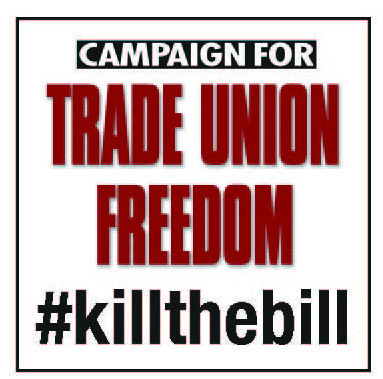 The Trade Union Bill is a serious attempt to stifle our liberties. SARAH VEALE examines its proposals.

THE Tory governmentās Trade Union Bill, which had its first reading in the House of Commons on July 22, is the nastiest piece of trade union legislation since the days of Norman Tebbit and Margaret Thatcher.

That is saying something, as it was they who introduced endless regulations to make it more and more difficult for unions to organise a legally compliant strike or to represent their members.

While falsely describing themselves as the party that stands up for working people, the Tories are setting about trying to destroy their voice and their most powerful means of protecting their rights at work.

By attacking unions that have political funds, the Tories are also attacking the Labour Party and campaigning work unions carry out in defence of their membersā interests.

Unions are already very heavily regulated. It is extremely difficult for unions to organise industrial action and be legally compliant, with requirements for two sets of notices to employers, complex balloting laws and restrictions on picketing.

Despite this there is far more to come. The Bill includes proposals in a number of areas: thresholds for strike ballots, more restrictions on picketing and on the right to assemble, tighter regulations under the certification officer and a new āopt inā to political funds, as well as potential attacks on union facility time.

Alongside the Bill the government intends to remove the existing ban on employers using agency workers to substitute for those taking industrial action.

They can and are doing this by secondary legislation, with no proper scrutiny in Parliament.

Allowing employers to take on substitute workers to break strikes is potentially one of the most damaging aspects of their plans.

Quite apart from the ethical objections to strike breaking and the damage it will do to industrial relations, it is an appalling position to put agency workers into.

The public will no doubt be alarmed at the prospect of public services being delivered by inexperienced people.

It will be done after unions have gone through all the new hoops and hurdles to make the ballots compliant, so that in the public sector in particular there will effectively be a triple lock on unions.

The reforms to the laws on picketing are draconian and are alarming civil liberties organisations.

The code on picketing will be expanded to require an array of new arrangements to be put in place.

For example, unions will have to appoint a supervisor for each picket line, who will have to wear a special armband and will have to give the police and their employer their mobile phone number.

Breaches of this, or indeed of the proposed tightening of the old Victorian āwatching and besettingā laws that restrict assembly near an employerās home, will be liable for fines and potential criminal sanctions.

The most talked about aspects of the Bill are the new ballot thresholds. In all sectors unions will have to achieve a 50 per cent turnout, so half of those balloted would have to vote if the strike is to be legal.

In the public sector there is to be an additional threshold for those involved in providing what the Bill calls āimportantā services.

For these groups a second threshold will be introduced, which will require 40 per cent of eligible voters to back strike action. This will mean that abstentions will count as No votes and, of course, this is a threshold precious few politicians manage in their elections.

There are other proposals in the Bill which, taken together, add hugely to the volume of regulation imposed on unions. To enforce all of this the certification officer is to be given greater powers to instigate actions against unions, for the pleasure of which unions will be required to pay an annual levy.

So what is the TUC planning to do to build mass opposition to all of this? First, we are organising a demonstration outside the Tory Party conference in Manchester on October 4.

This has to be a huge demonstration to drown out the noise of sneering Tories, so make sure you and all your friends, neighbours and relatives are there.

Second, there will be a major rally and lobby of Parliament on November 2.

Above all, we have to use every means at our disposal to build links with community groups, civil liberties campaigns and all who will join us in defending the right to strike. We will use electronic communications, broadcast and print media, meetings, lobbies and rallies. Together we can defeat this attack on our rights.