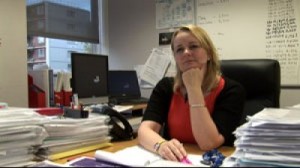 The recent right-wing press castigation of Unite Leverage is best proof yet of its effectiveness and shows the way forward for the union, writes Unite’s Sharon Graham

The recent media hysteria, designed byÂ Lynton CrosbyÂ to portray Unite as political and economic “wrecker” and “intimidator” of the innocent, has consistently failed to grasp the real questions being posed by Unite to the political and corporate elite.

In this era of neo-liberalism, with its complementary weak employment laws and a surging globalisation that continuously erodes the power of the nation state, it is most often organised labour that provides the remaining bulwark of resistance to the “race to the bottom.”

This responsibility creates a demand not just to resist but to do so effectively. Put simply, we now more than ever need to be in the business of winning and growing and to do this we need to use “brains as well as brawn.”

This is why so-called “sinister” Unite Leverage has been held up to the nation. It is not about attacking small, silent protests outside the homes of faceless decision makers – it is an attempt to discredit the developing strategic awareness of Unite – to strangle an approach that delivers at birth.

For perfectly understandable reasons Unite Leverage was not deployed against Ineos at Grangemouth and it should not be confused with the community awareness activity of decision makers that took place.

Leverage is used sparingly and where it has been fully executed we have succeded. Whether it is against the violation of human rights that is “blacklisting” or securing justice for workers faced with illegal closures, Unite has shown that it can win against global corporations seemingly impervious to traditional trade union responses.

When confronted by crisis situations involving battle-hardened corporations it is often no longer enough to mount the picket line and moralise in the media.

Leverage can never replace collective organisation at the place of work but strategic planning and campaigns involving global escalation are essential characteristics of the modern, progressive trade union.

It is perfectly legitimate for decision-makers, shareholders and customers to be made aware of the behaviour of those they are associated with and be tasked with taking action.

But you don’t move employers by just throwing bodies into a protest – as symbolic as that can be. The hostile employer must face a campaign of escalation that creates uncertainty in the minds of decision makers.

This is not delivered by “intimidation” but by research, planning and the execution of tactical activity. Unite Leverage is not an emotional outburst, it is a strategy designed to level the uneven playing field.

For Unite the progressive traditions of the labour movement must be matched by a calculated, forward looking approach.

The core objective of Unite Organising and Leverage is to rebuild and defend the shop stewards movement.

The failed models of business unionism and phony partnership have not grown our movement or delivered for ordinary working people.

It is only the continuous development of strong, collective organisation at the place of work that can secure a progressive and sustainable future. This has to remain the raison d’etre of the trade unions.

However, it is not enough to just build confidence and then leave it to the shopfloor, as romantic as that can seem. If we do this we are letting ourselves down. To defeat powerful, unethical employers we need strong workplace organisation coupled with a union capable of delivering.

Times have changed and we must change with them. Now is not the time for faint hearts, it’s time to get serious about winning.

Â Sharon Graham is executive officer of Unite the Union

This blog first appeared in the Morning Star, November 15th