The Airbus 8 and the right to strike: unfinished business 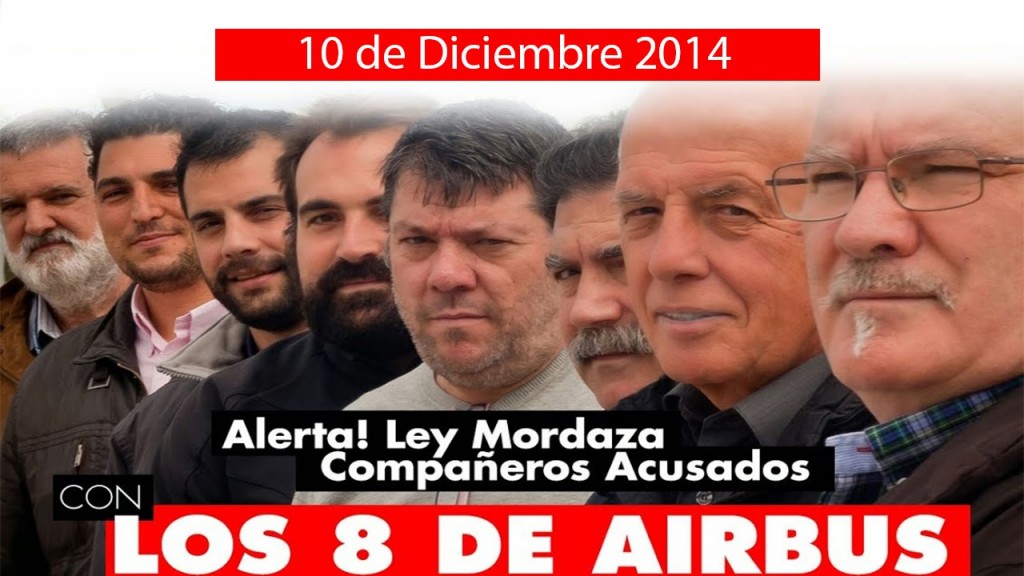 On February 16th a Spanish court acquitted 8 trade unionists facing prison terms of over 8 years for participating in the 2010 general strike against the government’s austerity measures.

The 8 were among a large number of workers peacefully demonstrating their support for the strike outside the Madrid Airbus factory. They were arrested and charged with interfering with “the right to work”, under an article of the penal code dating from the Franco era, after police fired live ammunition to disperse the demonstrators.

Their acquittal, following the acquittal earlier this month of two trade unionists in Malaga also facing criminal charges for striking, is welcome news.Â  Trade unionists from across Spain and Europe demonstrated at the start of the Airbus trial in an important show of international solidarity. However hundreds of trade unionists in Spain who took part in the general strikes of 2010 and 2012 continue to face prosecution and lengthy prison terms under the same article of the penal code.

The acquittals should generate renewed pressure on whoever forms the new Spanish government to drop the ongoing criminal cases against citizens, workers and trade unionists who took part in the anti-austerity strikes and demonstrations of 2010 and 2012 and to eliminate Article 315.3 from the criminal code.

Spain also offers a vivid illustration of the organic connection between the right to strike and democratic and civil rights generally. Spain’s right-wing government has resuscitated a piece of the fascist-era criminal code to undermine post-Franco constitutional rights and pursue an austerity agenda designed to shrink the public sector, weaken collective bargaining and promote casualization. It has bundled these with proposed legal ‘reforms’ which, according to independent UN human rights experts, seriously restrict the exercise of basic civil rights.

In the UK, the Tory government’s proposed Trade Union Bill not only seeks to undermine the right to strike by introducing onerous balloting procedures, limitations on picketing and an expanded definition of “essential services”, among other measures. It contains outrageous restrictions on the general rights to expression and assembly. The government of Korea’s efforts to stifle protests against the hugely anti-democratic Trans-Pacific Partnership has been an important component of the growing criminalization of trade union activity in that country.

In international human rights law, the right to strike is seen as an essential component of workers’ right to freedom of association for purposes of collective bargaining. The fundamental human right of workers to form trade unions and to strike, as an expression of freedom of association, is founded on the explicit recognition that wage earners stand in an unequal bargaining relationship against capital. Human rights law recognizes no equivalent ‘right to lockout’, because the lockout makes the stronger party even stronger. Spain’s constitution in fact recognizes this vital difference by assigning distinct legal bases to its treatment of strikes and lockouts, which is why the government has resorted to the anachronistic Article 315.3 to undermine a fundamental democratic right.

Without the right of workers to collectively withdraw their labour no other democratic right is secure. Defense of the right to strike is more vital than ever.