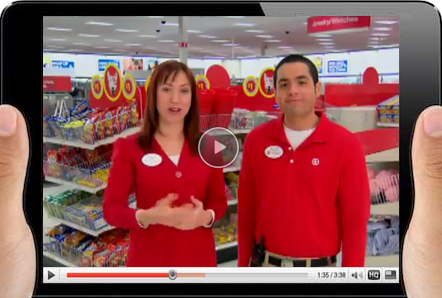 Target is America’sÂ third largest retailer. It is also as staunchlyÂ anti unionÂ as they come. This anti-union video is one of a series issued by Target which are not supposed to be duplicated.

The existence of Target’s new anti-union employee training video (entitled “Think Hard: Protect Your Signature”) has now been made posted on a number of websites.

It features ‘Dawn and Ricardo’, who talk toÂ Target workers aboutÂ about unions. “Someday, someone you don’t know may approach you at work, or visit you at home, asking you to sign your name to an authorization card, petition, or some other union document,” Ricardo warns.

“Unions want what we have” the video declares. Ricardo explains, as if speaking to a child: “We’re a target, because unions are threatened by us. And here’s why: when we take business away from retailers that are unionized, those companies may downsize, reducing the number of employees. And that means the union loses members, which is a big problem for the union business. Did you notice how I just called it a business? Because that’s what it is.”

The video drones on for 15 minutes, as ‘Dawn and Ricardo’ plod through various dire consequences of unionisation. “You could come into work one day to find union protesters telling our guests not to shop at Target,” Dawn says. “And how could that possibly be good for anyone on our team?”

How about higher wages and better benefits and improved working conditions? Notably absent from this video is any discussion of the fact that the primary reason Target does not want any of its employees to unionize is not because it fears a loss of its precious “culture,” but because it fears having to pay higher wages and provide better benefits and working conditions.

At the end, the video proclaims that if a union comes into the happy Target workplace, “All those open doors may have to close.”

To experienceÂ this undoubtedly awful video or can sit through fifteen minutes of this drivelÂ click here orÂ on the graphic above.