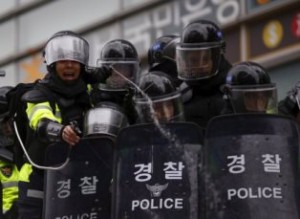 The increasingly authoritarian government of Korean President Park Geun-hye is stepping up its attacks on trade unions and their rights. Police raided the offices of the KCTU Korean Public Service and Transport Workers’ Union (KPTU) on November 6th, attacked participants in a mass demonstration against regressive new labour legislation on November 14th and followed that up by raiding the offices of eight KCTU affiliates on November 21st.

The government is attempting to silence democratic criticism and force through anti-union legislation and an unpopular trade deal, the Trans-Pacific Partnership (TPP), by restricting basic trade union and democratic rights.