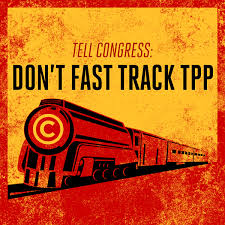 “Friday’s defeat of Fast Track in the U.S. House of Representatives should be a step toward reforming America’s trade policies to reinforce American manufacturing and to create good, family-supporting jobs.

“The USW and working people across America are asking the lawmakers who stopped Fast Track Friday to again stand strong for the do-over vote this week and reject all attempts to flip their votes.

“Over the past several months, the public loudly demanded a new approach to trade. The USW commends the congressional members who acknowledged those pleas by courageously defeating the wrong-headed policy called Fast Track. This policy allows an Administration to ram job-killing free trade agreements through the congressional approval process without amendment or full debate.

“Despite the original vote defeating Fast Track, Republican leaders are using their control of the congressional rules procedure for a do-over vote this coming week on Fast Track and an accompanying trade bill package.

“Rejecting Fast Track is an economic life or death struggle for American workers because past Fast Track votes have facilitated the so-called free trade regime during the past three decades that have cost communities tens-of-thousands of factories and millions of jobs.

“Fast Track was defeated last week because a must-pass companion bill failed. That bill, Trade Adjustment Assistance (TAA), was supposed to restore a federal program to aid workers who lose their jobs because of bad free trade deals. Both Republicans and Democrats voted against TAA, for a final tally of 302-126.

“Republicans opposed TAA because they don’t believe in helping workers thrown out of jobs by bad trade deals.

“Many Democrats, who support assisting workers injured by trade deals, rejected paying for the aid with cuts to Medicare or reductions to Medicaid dialysis. In addition, many opposed excluding public sector workers who were impacted by city and state revenue reductions when private sector job losses caused by imports hurt the economy.

“Other Members of Congress declared the TAA program was underfunded, considering the massive number of workers rendered unemployed by offshoring. That has been the fate of more than 5 million American industrial workers since the NAFTA trade agreement was approved in 1994.

“Instead of trying to grease political wheels with pork and promises, the Obama Administration and Congressional Republicans should concede defeat and begin the difficult task of fundamentally changing America’s trade policies to ensure they work for working families.

“Until that happens, USW members, workers and coalitions across America will continue to fight alongside lawmakers like House Minority LeaderÂ Nancy Pelosi, U.S. Sen.Â Sherrod Brown, and U.S. Reps.Â Rosa DeLauroÂ andÂ Sandy LevinÂ to retain the support of those who voted Friday against bad trade policy.

“The USW stands by those who believe this country must move toward fair trade, strong American manufacturing and family supporting jobs.”