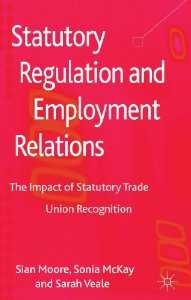 Edited from the press release that accompanies the book:-

This book provides a comprehensive socio-legal evaluation of the UKŌĆÖs statutory union recognition procedures established in the year 2000 over ten years of its operation – in the context of UK labour law, changing work relationships, the dissipation of collective bargaining and union membership decline.

The authors, Sonia McKay, London Metropolitan University; Sian Moore University of the West of England and the TUCŌĆÖs Sarah Veale consider how far it has provided a template for the incursion of the law into industrial relations, with voluntarism no longer a dominant model in UK industrial relations, and how far it has encouraged a more limited form of joint regulation.

They also reflect on how the procedure has shaped union strategies and on whether it creates the conditions for worker mobilisation. The central trend has been the decline in applications to the CAC and whilst the design and operation of the procedure may discourage unions from submitting claims and permit employers to undermine the process, its impact is also influenced by union capacity to generate cases, something defined by wider economic, social and political relationships.

At the launch of the book at the TUC in London on July 14th┬ĀTony Burke, Unite AGS and Chair of the Campaign For Trade Union Freedom, along with Mary Stacy of the CAC and Paul Nowak of the TUC, spoke about his experiences of using the legislation notably when the law was first introduced in the UK. Below is an abridged version of his speech:

ŌĆ£When Sarah Veale contacted me and asked me to speak at this event – it was on the basis that my previous union – the Graphical, Paper & Media Union was one of the first unions to utilise the Government statutory regulation procedures. Indeed, the GPMU was, I believe, the first union to appear at a full CAC hearing when we applied for statutory recognition at a print company called Statex.

This case (which was won by the union – with an award of statutory recognition) was followed by a number of other claims to the CAC which were successful, some after ACAS intervention. However we did have some losses as well and there were a number of setbacks.

We have to put this experience into context.

During the mid 1990ŌĆÖs the GPMU and other unions, having faced significant de-recognitions began to launch strategic organising campaigns based on the US organising model and on a “3 R’s Campaign – Recruitment, Retention and Recognition”.

As the Chair of the TUC’s New Unionism Campaign, I persuaded the GPMU to sign up to the TUCŌĆÖs Organising Academy and as founder members of the Academy we recruited 6 dedicated organisers, recognising that the opportunities were there to recruit and organise in the printing and publishing industries.

We also had to use all our influence inside the Labour Party, lead by the General secretary of the GPMU Tony Dubbins to secure promised statutory recognition procedure in the 1997 General Election manifesto.

What New Labour did was to examine a number of systems and were attracted to the system that operated in the USA, the NLRB system, rather than to a system of granting automatic recognition where a union could┬Ā easily demonstrate to ACAS or an employer that we had sufficient members and their support to win union rights. New Labour were under significant pressure from employers and the CBI during the discussions in the Labour Party and after the election win in 1997.

When the legislation was eventually ┬Āpublished there were a number of key areas that gave unions cause for concern.

The Government inserted a series of hurdles or tests that a Union would have to overcome if the CAC decided they should be put in place.

These included questions about the probability of union members voting for union recognition; the question of any pre-existing union arrangements (which included moribund agreements); the notorious clause which gave non independent in-house unions ongoing recognition such as happened at News International and of course the decision to exclude companies with fewer than 21 people from the automatic recognition procedures, even where a union could demonstrate a majority membership.

This last point was in particular a bitter disappointment given the large number of small companies existing in print and publishing.

However having done a significant amount of organising work in the the 1990s, the GPMU were able to secure some important organising and recognition wins both voluntary and through the CAC. Sometimes just filling the form in and sending via ACAS got us into discussions, sometimes employers decided to dig their heels in. The law also had teething problems.

The GPMU had won union recognition at Statex and at other companies but we were tested further at Red Letter, a direct mailing company where we were forced through the whole of the CAC procedure to a full ballot of the workforce.

If it wasnŌĆÖt for the sheer determination and guts of our local Union Reps we would have been defeated as the company had all the cards stacked in their favour and used them in full ŌĆō including dragging out the process in attempt to wear the workforce down.┬Ā As it was we won it by ŌĆ£a squeakŌĆØ.

There were many other wins for unions during this first year or so – what Professor Keith Ewing describes as ŌĆ£unions being able to pluck the low hanging fruitŌĆØ.

The authors have covered the history of CAC claims ŌĆō there have been some good wins for unions as well as losses and some surprises.

Unions certainly learnt lessons. In the GPMU we employed not just organisers to ‘innoculate’ our members and to train them to handle company anti-union campaigns we had a member of staff almost full time preparing all the documentation that was needed to bring a claim, prepare our officers and union reps, ┬Ādouble check petitions, and details on every document. Every dot and every comma had to be in place to avoid a challenge from anti union lawyers and we had to consult on a regular basis with our own lawyers. Far flung from the idea of 50% + 1 and you were in!

So, to draw conclusions.

There is no doubt that the CAC procedures enabled unions such as the GPMU to secure recognition where we had prepared the ground and where Unions were prepared to put in significant amounts of work to win union rights at the workplace.

But there are weaknesses as we know. What could have been a simple process of securing 50%+1 verified by ACAS for instance has become the province of legal challenges, loophole seeking, and an industry for anti union lawyers.

Companies who could have reached an agreement easily (and some did) were persuaded to fight union recognition by all means at there disposal.

Workers in small companies employing less than 21 employees (which usually includes a majority of women and young people) have little chance in securing the right to union recognition and collective bargaining.

The book covers all of this history ŌĆō and we need to learn from it”.