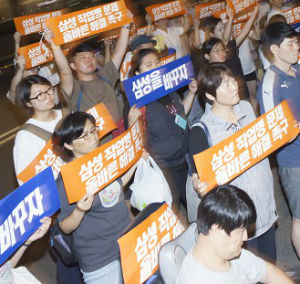 Currently, the strike of public sector workers against the regressive labour reform and performance based pay system was declared ‘illegal’ and nine leaders of Korean Railway Workers Union are accused for the notorious ‘obstruction of business’.

Â In order to end the strike, the government is seeking ’emergency arbitration’, a practice denounced by the ILO as infringement of freedom of association. The self-employed truck drivers also face criminal and civil charges for a strike they planned.

While the focus of international protest has been mostly on the government itself, the role of Korean business, and especially the shadowy Chaebol conglomerates which dominate the national economy, is coming under the spotlight.

Â A new ITUC/IndustriALL report on Samsung details the lengths to which some Korean employers will go to bust unions and repress workers’ rights inside Korea and in international supply chains.
President Park will have to step down at the end of her term in December 2017, and it is crucial to keep up the pressure to break the stranglehold that a few corporations have over the state.

Â A new President should mean a new start for Korea, one where fundamental rights, economic security and safe work for ordinary people are the order of the day. In the coming weeks and months, every bit of pressure on the current regime of President Park will make it that much harder for corporate greed to maintain its grip on one of the world’s most significant economies.

The International Transport Workers Federation (ITF) and Public Services International (PSI) are calling for unions to picket outside South Korean embassies on 12 October to urgently protest against government repression of trade unions in South Korea.

The ITF is organising a picket of the South Korean embassy at 60 Buckingham Gate, London SW1E 6AJ between 12.30 and 13.30 on Wednesday 12 October. Please join us there to take a message of defiance from the Korean unionists to their government and to express your solidarity with them. Please bring your union banners with you.