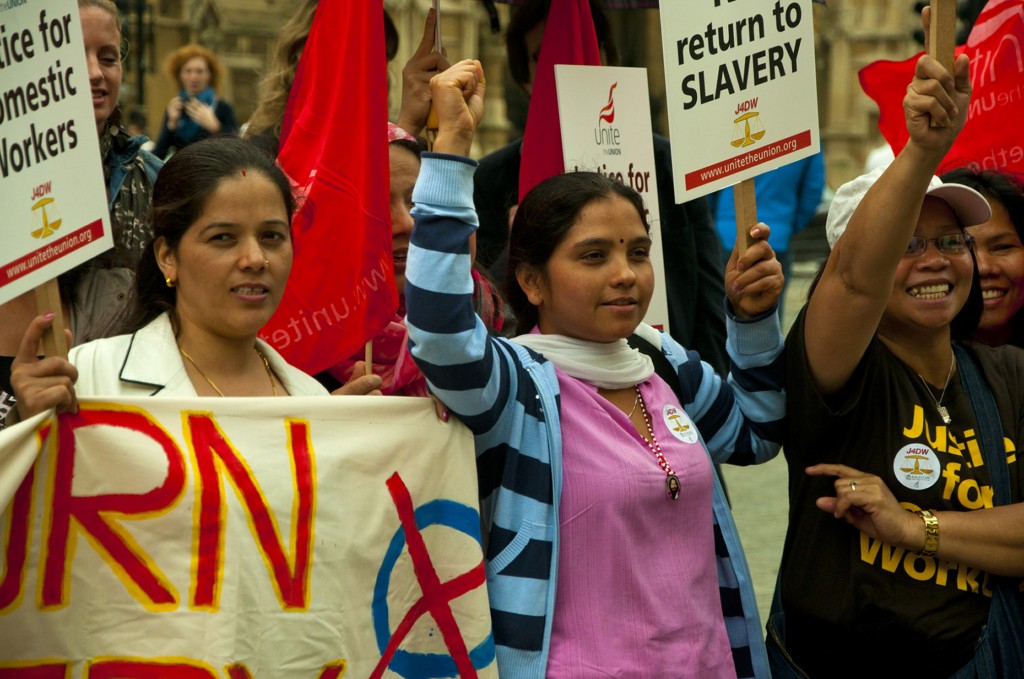 Some say the Tories want to take us back to the Victorian era, what with private health care, workhouses and Michael Gove’s “great white men” history curriculum plans.

But when it comes to immigration they’ve set their sights higher. Serfdom’s back.

Supposedly this is an anti-immigration measure which will reduce migrant numbers.

That would be nasty enough.

But actually it’s unlikely to have much of an influence on migrant numbers.

Its main impact will be to remove rights for some of the worst-paid and most badly treated workers in the country – ticking another Tory box.

The domestic worker visa was introduced in 1998.

Lots of rich people come to live in Britain from all over the world – the government doesn’t have a problem with this. You’ll remember it bragging about rolling out the red carpet for French tax exiles.

Some of these rich people, particularly from the Gulf states or south Asia, bring domestic servants with them.

Often these servants suffer appalling treatment at the hands of their employers. Horror stories about beatings, restrictions on their movement and unpaid bondage are common.

The visa was won after years of campaigning by groups committed to provide these workers with at least some legal rights.

Last year 15,745 were issued – similar to the number in previous years. There hasn’t been any explosion in numbers forcing the government to clamp down.

But now you can’t get one. Instead you can get a tied visa, introduced last year.

The biggest difference here is that on a tied visa you do not have the right to change employer.

You are brought in by one employer and to legally remain in Britain you have to work for them and no-one else.

“It’s a terrible reflection on this government to withdraw workers’ rights and protection from one of the most vulnerable groups of workers,” Sister Margaret Healy, co-founder of the domestic worker campaigning organisations Kalayaan and Justice for Domestic Workers, tells me.

“After all, if you live in the household of your employer you are totally in their control.

“Many are literally locked in the house when the employer goes out – and domestic workers in private households are not covered by health and safety legislation or even the Race Relations Act.”

So the effect of the changes is simply to benefit exploitative employers.

Super-exploited staff will literally have no way out. Few will have the money for a plane home, after all.

Under the previous system a shocking 14% of overseas domestic workers were paid nothing at all.

Statistics gathered by Kalayaan show that under the tied visa that’s up to 62 % in a single year. And not a single person on the tied visa who was surveyed earned more than ÂŁ100 a week.

Sister Healy argues that there’s no justification for withdrawing the original visa. “It has not been abused.Â The Home Office knows exactly where every domestic worker lives and works, because they have to supply the information yearly when they renew their visa.

“Just when the International Labour Organisation is promoting rights and protections for domestic workers worldwide, the British government withdraws all of them. It’s shameful.”

It’s difficult to make much sense of this latest policy of the coalition government. The alleged intention, to cut migration, seems unlikely to work.

Employers who know they can bring people over who have no rights will be even more likely than before to import workers rather than hiring British citizens.

And the removal of all protections makes it more likely that desperate workers will flee abusive employment and join the reservoir of undocumented workers.

They will be untrackable and the exchequer will also lose the tax and national insurance that workers paid when legitimately employed.

It can only be hoped that the government listens to the arguments from Kalayaan, Justice for Domestic Workers and Unite the union, which are all calling for the restoration of the overseas domestic worker visa with immediate effect.