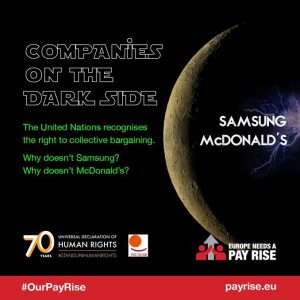 The right to join a trade union and the right to collective bargaining are basic, human rights recognised by the UN International Labour Organisation.

Yet many well-known multi-national companies do not recognise trade unions, and do not negotiate with trade unions on pay and working conditions.

The International and European Trade Union Confederations (ITUC and ETUC) are joining forces for Human Rights Day (December 10) to name and shame two multi-national brands and household names that refuse to negotiate with trade unions.

The ITUC & ETUC is naming and shaming:

Samsung –¬Ýhas a no-union policy in its factories and workplaces, and intervenes to prevent the formation of unions at its suppliers. Samsung accumulates billions in profits at the expense of its workers. It has a well‚Äêdocumented history of labour abuses in its supply chain ‚Äì from union busting, poverty wages, insecure and unsafe work, to forced overtime, informal work and modern slavery.

Workers are working in such distressed circumstances that in some countries the company has had to remodel its dormitories to prevent employees from committing suicide. It is time for the Giant Tech to ‚ÄòEnd Corporate Greed‚Äô and guarantee a fair living wage and trade union participation and representation for its workers.

McDonald‚Äôs ‚Äì the fast food giant does not bargain with a trade union over working conditions for workers in the UK ‚Äì but it does in Denmark, France and Germany. In Denmark and Germany the collective agreements cover franchised stores as well as well as McDonald‚Äôs own corporate stores.

With the European Commission, International Monetary Fund, and other institutions increasingly recognising the need for wage increases to drive economic growth, and tackle inequality, the right to collective bargain is vital not only for working people, but for the economy and social justice.

‚ÄúThere should be no place in a modern economy for companies that do not negotiate with trade unions‚Äù said Luca Visentini, General Secretary of the ETUC. ‚ÄúCollective bargaining between employers and trade unions is the best way to get sensible pay rises that benefit workers, company productivity and the economy as a whole.‚Äù

‚ÄúSamsung and McDonald‚Äôs like to promote themselves as modern, family-friendly brands, but their attitude to trade unions is strictly 19th century‚Äù said Sharan Burrow, General Secretary of the ITUC. ‚ÄúWe will not rest until workers get a fair deal in these companies.‚Äù

Thanks to Barry Camfield.