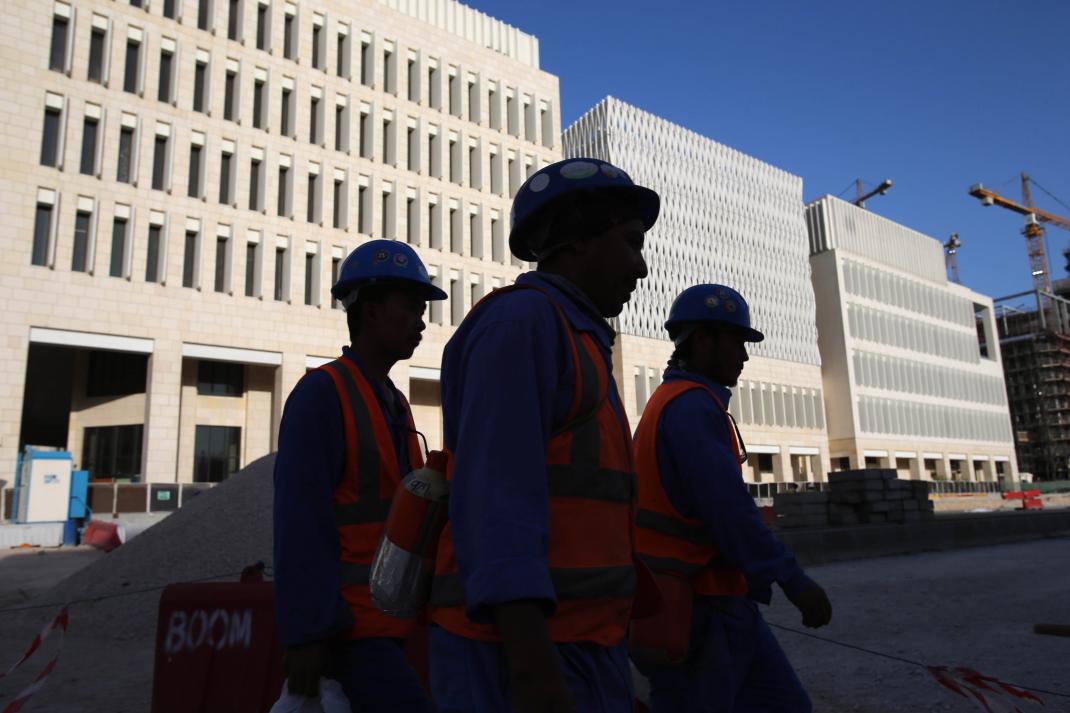 Hundreds of migrant workers inĀ QatarĀ went on strike this week to protest what they say are poor working conditions, unpaid and delayed wages, and threats of reduced wages.

Despite introducing some labour reforms over the past year, Qatari authorities have failed to abolish the exploitativeĀ kafalaĀ sponsorship labour system that fuels abuses and grants employers excessive power over their employees. Migrant workers are still banned under Qatari law from joining unions and participating in strikes.

āThe workers in Qatar are going on strike in a country that bans them from striking or joining unions, and against the backdrop of a labour system that leaves them vulnerable to abuse and exploitation,ā saidĀ Lama Fakih, acting Middle East director at Human Rights Watch. āAbusive labour practices that lead workers to take such a risk will continue until the Qatari government makes good on its promise to repeal theĀ kafalaĀ system.ā

Migrant workers in Qatar are governed by an exploitative labour system that can leave them vulnerable to forced labour by trapping them in employment situations in which their rights to fair wages, overtime pay, adequate housing, freedom of movement, and access to justice are at risk. These serious and systemic abuses of migrant workersā rights in Qatar often stem from the still unrepealedĀ kafalaĀ system, which ties migrant workersā visas to their employer and severely restricts their ability to change employers.

In addition, the routine confiscation of workersā passports by employers, debts incurred by migrant workers to pay for recruitment fees, and the prohibition on migrant workers joining unions and striking,Ā leaves workers vulnerable to abuse.

One migrant worker at a Qatari company that provides maintenance, cleaning, plumbing, and other services, told Human Rights Watch that he and between 800 and 1,000 other employees refused to report to work on August 5th, 2019. The employee said there had been repeated threats from management to deport the workers if they refused to sign new contracts substantially reducing their wages.

The worker said that he had already been forced to sign a contract when he arrived in Doha in 2018, under threat of deportation, for lower wages than he had been promised by a recruitment agent in his country. āThe sponsor blamed it on the agent,ā said the worker. āHe said to me, āsign it or go back home.āā Hamad International Airport, Qatarās main airport, is among the companyās clients.

Despite the ban on migrant workers striking, and burdensome conditions even for Qatari workersā right to strike, the migrant worker said that he and his colleagues were allowed to continue protesting in Dohaās Asian Town district until midnight. He said that five police vehicles, three of them riot police vehicles, arrived on site at about 7pm, over three hours after workers had started congregating, but that they did not try to disperse the protesters. Human Rights Watch reviewed a video corroborating this information.

He also said that Qatari men he suspected were high-level labour ministry officials arrived on the scene. āThey came to calm people down, saying to us they will find solutions,ā he said.

Reports have also surfaced ofĀ an August 4, 2019 strikeĀ in the Shahaniyeh municipality, withĀ videosĀ and imagesĀ circulated on social media showing hundreds of workers protesting unpaid and delayed wages. One migrant worker shared a video of the protest on Facebook, saying that his company had not paid its workers in five months. A local resident confirmed the strike and the protestersā wage demands to Human Rights Watch.

Since October 2017, when Qatar committed to align its laws and practices with international labor standards, the government has introduced several reforms aimed at improving conditions for migrant workers. They include setting aĀ temporary minimum wage,Ā introducingĀ a law for domestic workers, setting upĀ new dispute resolution committees, mandating the establishment ofĀ joint labor committeesĀ at companies employing more than 30 workers for collective bargaining, establishing aĀ workersā support and insurance fund, and ending the requirement for most workers to get an exit permit through their employer to leave the country.

While positive, these reforms have not gone far enough, and implementation has been uneven. The domestic workers law isĀ poorly enforced and below international standards. The workersā support and insurance fund, introduced to make sure workers are paid unclaimed wages when Ā companies fail to pay, is not yet operating. Qatari authorities areĀ failing to enforce bans on passport confiscations and workers paying recruitment fees. The joint committees, with equal representation of workers and management,Ā have yet to be rolled out. The lack of enforcement also undermines theĀ partial exit permit reform, which does not apply to domestic workers, government employees, and up to five per cent of any companyās workforce.

Most importantly, theĀ kafalaĀ system remains in place, hindering the efficacy of the recently introduced reforms.

Qatar should amend its laborĀ law to guarantee all workers, including migrant and domestic workers, the right to strike and to free association and collective bargaining. It should also fully abolish theĀ kafalasystem, including allowing workers to change jobs without requiring employer consent, regardless of how long they have worked for that employer, and repealing employersāĀ power to cancel workersāĀ visas at will. Such changes would make it easier for workers to leave abusive labor conditions.

āDespite the vulnerable position these migrant workers are in, we see them standing up for their rights.ā Fakih said. āThe government should respond by ensuring greater protections for workers under Qatari law.ā