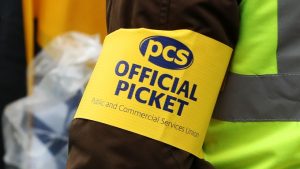 By Lynn Anderson, PCS National Officer for Scotland and Ireland.

James didnāt vote. Let me call him James, although he could be John, Robert or Paul. He told me that he has been a union member for 27 years and this was the first time he hasnāt voted in a national union ballot.

The Public and Commercial Services Union (PCS) national ballot was in response to the governmentās pay remit for civil servants.Unlike all other parts of the public sector, the British government plans once again to cap the pay of its own workforce at 1 per cent.A further 0.5 per cent can be made available by departments but only at the expense of cutting jobs and services.

Our unionās national pay claim is for 5 per cent for all civil servants. It is a modest and realistic demand to begin a journey of pay restoration for civil servants like James.

As a low-paid Job Centre worker in a rural part of Scotland, Jamesās salary has not really increased by more than a few hundred pounds a year since he joined the Civil Service.
Once he reached the top of the progression scale, James has depended for years on the rate for the job increases negotiated by his union.

Over the past decade, this has been frozen and capped by successive governments to below-inflation levels.

Under the new Tory anti-union law ā the Trade Union Act that came into force last year ā James was denied participation in the important ballot on industrial action to fight for the future of his pay.

This is because the Act insists that statutory trade union ballots can only be returned by post. In the super-connected electronic age, the deliberate restriction on trade union membersā democratic participation is an ideologically driven denial of trade union freedoms.

From June 18th to July 23rd, the PCS national ballot on pay asked members whether they were prepared to take industrial action to force the government to consider our 5 per cent pay claim.

This was the biggest trade union ballot under the new Act. Over 120,000 PCS members in more than 600 workplaces throughout the UK were balloted.

The current British government is a hostile employer. Our reps therefore had restricted access to the workplace.

They were denied desk-dropping of ballot materials or displaying posters. Email correspondence from official government addresses could not contain the words āballot,ā āstrikeā or āvote.ā

Our only real widespread access to members then was through personal email and phone calls. We phone banked over 50,000 members to encourage them to vote. Thatās how I encountered James.

When he answered my call, James said he was pleased to speak to someone from the union, as he wanted to report that he could not vote.

I was the first person to speak to him about the ballot. James lives alone in the countryside, with no near family or neighbours. He received his ballot paper in the post. It was sat in the pile of correspondence to be dealt with on his kitchen table. But then he was taken to hospital, and with no visitors, he had no access to his ballot paper. James was apologising to me that he couldnāt vote.

Jamesās story has stayed with me. He wanted to vote Yes, but was denied because of the restriction to postal voting. Jamesās vote, along with all other non-voters under the Trade Union Act therefore count as an effective No vote.

The Act requires a minimum of 50 per cent of eligible members participating in a statutory ballot before it can be valid.

The PCS ballot returned the largest percentage vote for industrial action in a statutory ballot in the unionās history, the turnout at 41.6 per cent. It clearly shows the level of anger among PCS members about their treatment by the Cabinet Office and Treasury over pay.

It is also a tribute to the commitment and dedication of PCS reps in our workplaces across the UK.

However, the turnout figure failed to meet the 50 per cent threshold that the Trade Union Act requires for the ballot result does not provide a legal basis for strike action.

It is a huge disappointment for the tens of thousands of PCS members who voted to fight for higher pay this year.

Despite the ballot result, the issue of pay remains vital to our members and our NEC has vowed to continue the campaign in 2018 and 2019. With 85.6 per cent of our members voting for strikes over pay, we are conveying this to the Cabinet Office as a show of strength and demanding urgent talks.

Huge amounts of data have been collected throughout the ballot, from members, branches and groups. We have a rich source of data on which to concentrate our organising and agitational resources.

While the ballot result means that we cannot take industrial action across our public-sector members, at delegated level our industrial departmental groups may consider taking strike action over departmental pay negotiations, where agreement is not reached.
PCS has received tremendous solidarity and support from across the trade union movement following this ballot result.

This review reported on December 18 2017 and recommended that electronic balloting pilots take place. The government has taken no further action in relation to these recommendations.

In the October 2017 PCS consultative ballot, 50 per cent of members voted online.
Anecdotal evidence from phone-banking and leafletting demonstrated that a large number of PCS members expected to vote online.

It is clear to me that if online voting (and secure workplace balloting) had been available, the PCS turnout would have been above 50 per cent.

Workers like James have been denied a vote that he could easily have participated in electronically. I am certain that we would have smashed the 50 per cent threshold if our members werenāt restricted to postal voting.

This article first appeared in the Morning Star on July 31st.