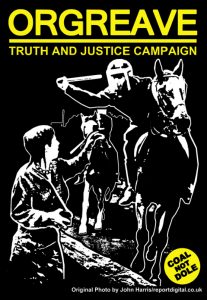 The decision is a bitter blow to former miners and campaigners who hoped an inquiry¬Ý (which they were lead by the Prime Minister to believe would happen – even in a limted form) would establish links between the misconduct by the South Yorkshire police during the Hillsborough disaster and their behaviour five years earlier at Orgreave.

Rudd ruled out any inquiry, saying very few lessons for the policing system of today could be learned from any review of events 30 years ago.

Campaigners, Unions and Labour MPs, who had been encouraged to expect some form of inquiry, even in a limited form, said they were shocked at the decision.

The Orgreave Truth and Justice Campaign supporters were in the Commons public gallery to hear the announcement.

Barbara Jackson, secretary of campaign, said the announcement had come as a ‚Äúcomplete shock and a great disappointment‚Äù and the decision meant there would be ‚Äúno transparency, no accountability, no truth and no justice‚Äù.

She said: ‚ÄúIt‚Äôs a complete and utter shock to us that we are getting nothing after campaigning for four years. So it‚Äôs OK that you get beaten up and seriously injured, but so long as you don‚Äôt die the police don‚Äôt have to be held accountable,‚Äù she said in reference to Rudd‚Äôs rejection of the inquiry on the grounds that Orgreave had involved no deaths or wrongful convictions.

The shadow home secretary, Diane Abbott, said: ‚ÄúIt is a grave injustice that there will be no statutory inquiry into the battle of Orgreave.‚Äù

The South Yorkshire police and crime commissioner, Dr Alan Billings, shared her concern. He said: ‚ÄúThe former miners and their families deserved to know the truth about what happened that day. I am therefore shocked and dismayed by this decision. The government have marched the Campaign for Truth and Justice to the top of the hill only to march them down again.‚Äù

He said he was unconvinced by the reasons given for refusing an investigation: ‚ÄúNo one has ever suggested that the events of Orgreave were comparable in every respect to the disaster at Hillsborough. But the former miners and the former mining communities in South Yorkshire deserve an explanation as to what happened on that day, and where Orgreave fits in the wider story of the miners‚Äô strike. I believe the government has shied away from agreeing an inquiry because of those wider issues.‚Äù

Andy Burnham, the former shadow home secretary who campaigned for an inquiry into both Orgreave and Hillsborough, said the Independent Police Complaints Commission had found evidence of perjury and perversion of the course of justice, and that new evidence had recently been put forward of orchestrated police violence and manufactured court statements. ‚ÄúThis establishment stitch-up is a purely political act.‚Äù

Frances O‚ÄôGrady, general secretary of the TUC, said that the message sent out today was ‚Äúthat corruption has a place to hide. Justice has been delayed, but we will not let it be denied,‚Äù she said.

Unite general secretary Len McCluskey said: ‚ÄúAmber Rudd‚Äôs shameful refusal to hold an inquiry into Orgreave smacks of a continued cover-up by the establishment. It will be a bitter blow to those who seek the truth and justice, to those to whom her government gave false hope.

‚ÄúThe brutal actions of South Yorkshire police at Orgreave, the subsequent cover-up and the injustice to ordinary working men and women cannot go unanswered. For this stain on the national history to be scrubbed away, the families deserve nothing less that the scrutiny eventually provided to the Hillsborough families.¬Ý

‚ÄúAmber Rudd had an opportunity to help to get answers, to back Labour‚Äôs commitment to an independent inquiry, instead she has betrayed the hopes of those whose lives have been scarred by Orgreave and slammed the door on the truth.

‚ÄúThe home secretary will learn the hard way that working class families do not give up on justice this easily. The fight for the truth will go on.‚Äù

Labour leader Jeremy Corbyn said he was ‚Äúabsolutely astonished‚Äù that Home Secretary Amber Rudd had decided against an inquiry after Theresa May had indicated to him that she was moving towards the position. Corbyn said that Labour is committed to holding a ‚Äúfull inquiry‚Äù.