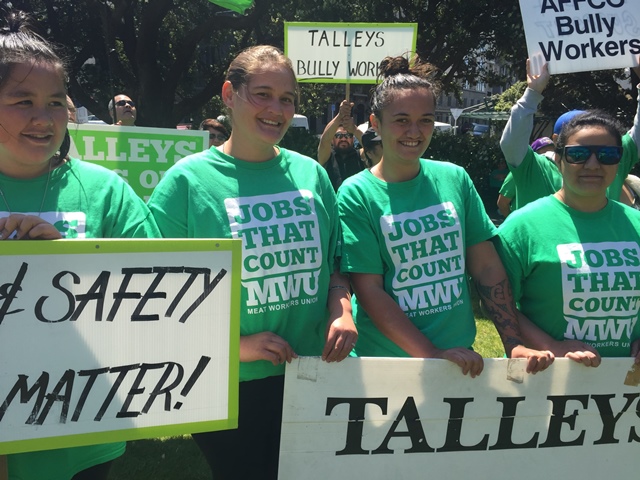 Members of the New Zealand Meat Workers Union began returning to work at the Talleys/AFFCO Wairoa plant on February 22nd following a court decision ordering the company to end the brutal 5-month lockout of union workers.

The union has warmly thanked the many thousands of supporters who responded to the IUF appeal for solidarity and sent messages to the company.

The court determined that fixed-term seasonal workers must be regarded as employees during the off-season and found the company guilty of employing replacement workers during a lockout.

The courts have also ordered provisional reinstatement of two workplace union leaders at the AFFCO Rangiuru plant who were dismissed last year on bogus charges. In a separate case involving the Talleys-owned South Pacific Meats, the company was fined NZD 144,000 for refusing access to the Meat Workers Union. And a court decision is scheduled for March 5 in the government case against AFFCO initiated last year following a serious accident at the plant.

However Talleys continues to use the legal system to pursue its anti-union agenda and resist collective bargaining; a number of company appeals are still pending. Continued pressure will be needed to ensure that Talleys/AFFCO respects the rights of its employees, recognizes the union, negotiates in good faith and addresses the serious health and safety issues in its operations.