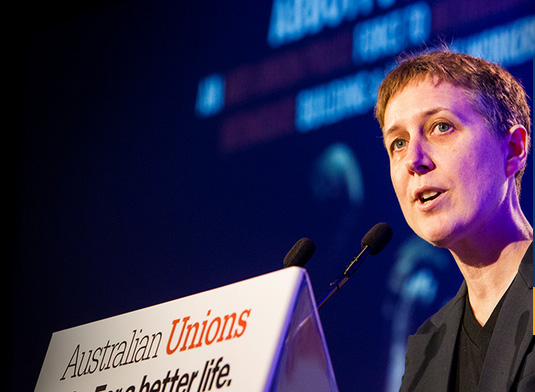 by Barry Camfield in Australia

Sally McManus has recently been elected Secretary of the Australian Council of Trade Unions, the first woman to hold the post.

In her message to Australian workers she argued: â€śâ€¦ the need to take on corporate greed and tackle inequality is urgent â€¦ The rules are not working for working people – thatâ€™s clear from the recent Fair Work ruling cutting penalty rates and the fact that jobs are being rapidly casualised â€¦ We are going to build and lead a movement to change the rules and bring fairness back to Australia.â€ť

She expanded on this theme in a radio interview: â€ś”I believe in the rule of law, when the law is fair and the law is right â€¦ But when it’s unjust, I don’t think there’s a problem with breaking it â€¦ It might be illegal industrial action according to our current laws, and our current laws are wrong â€¦ It shouldn’t be so hard for workers in our country to be able to take industrial action when they need to.”

She was immediately attacked by the leadership of the Liberal (Conservative) Party which sought to drive a wedge between the unions and the Labor Party by calling on Labor to distance itself from the unions (which it did).

Ms McManus came back fighting, making the case against the anti-union laws: â€śAustralia has been built by working people who have had the courage to stand up to unfair and unjust rules and demand something better â€¦ There is rampant lawlessness in the workplaces of Australia and this is occurring in the form of chronic underpayments of workers, exploitation of visa workers and workplace that put safety and lives of people at risk â€¦ Australian unions are committed to changing the laws at work because they are no longer strong enough to guarantee and protect workersâ€™ rights.â€ť