NAFTA: 20 Years Of Regret For Mexico 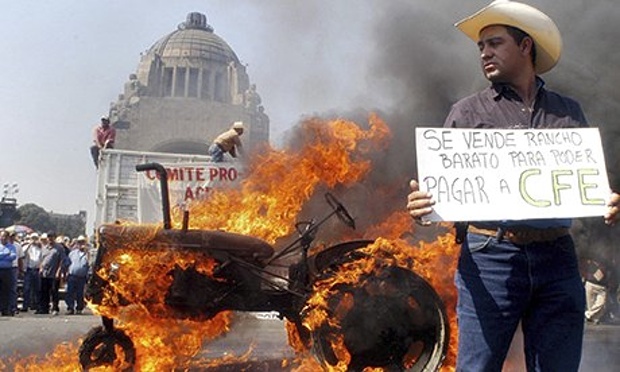 By Mark Weisbrot, from 2014 and sent in by Peter Rossman of the International Food Workers. Still as relevant today!

It was 20 years ago that the North American Free Trade Agreement between the US, Canada, andĀ MexicoĀ was implemented. In Washington, the date coincided with an outbreak of the bacteria cryptosporidium in the city’s water supply, with residents having to boil their water before drinking it. The joke in town was, “See what happens, NAFTA takes effect and you can’t drink the water here.”

Our neglected infrastructure aside, it is easy to see that NAFTA wasĀ a bad dealĀ for most Americans. The promised trade surpluses with Mexico turned out to be deficits, some hundreds of thousands of jobs were lost, and there was downward pressure on US wages ā€“ which was, after all, the purpose of the agreement. This was not like the European Union’s (pre-Eurozone) economic integration, which allocated hundreds of billions of dollars of development aid to the poorer countries of Europe so as to pull their living standards up toward the average. The idea was to push US wages downward, toward Mexico’s, and to create new rights for corporations within the trade area: these lucky multinational enterprises could now sue governments directly before a corporate-friendly international tribunal, unaccountable to any national judicial system, for regulations (eg environmental) that infringed upon their profit-making potential.

But what about Mexico? Didn’t Mexico at least benefit from the agreement? Well if we look at the past 20 years, it’s not a pretty picture. The most basic measure of economic progress, especially for a developing country like Mexico, is the growth of income (or GDP) per person. Out of 20 Latin American countries (South and Central America plus Mexico), MexicoĀ ranks 18, with growth of less than 1% annually since 1994. It is, of course, possible to argue that Mexico would have done even worse without NAFTA, but then the question would be, why?

From 1960-80 Mexico’s GDP per capita nearly doubled. This amounted to huge increases in living standards for the vast majority of Mexicans. If the country had continued to grow at this rate, it would have European living standards today. This is what happened in South Korea, for example. But Mexico, like the rest of the region, began a long period of neoliberal policy changes that, beginning with its handling of the early 1980s debt crisis, got rid of industrial and development policies, gave a bigger role to de-regulated international trade and investment, and prioritized tighter fiscal and monetary policies (sometimes even in recessions). These policies put an end to the prior period of growth and development. The region as a whole grew just 6% per capita from 1980-2000; and Mexico grew by 16% ā€“ a far cry from the 99% of the previous 20 years.

For Mexico, NAFTA helped to consolidate the neo-liberal, anti-development economic policies that had already been implemented in the prior decade, enshrining them in an international treaty. It also tied Mexico even further to theĀ US economy, which was especially unlucky in the two decades that followed: the Fed’s interest rate increases in 1994, the US stock market bust (2000-2002) and recession (2001), and especially, the housing bubble collapse and Great Recession of 2008-9 had a bigger impact on Mexico than almost anywhere else in the region.

Since 2000, the Latin American region as a whole has increased its growth rate to about 1.9% annually per capita ā€“ not like the pre-1980 era, but a serious improvement over the prior two decades when it was just 0.3%. As a result of this growth rebound, and also the anti-poverty policies implemented by the left governments that were elected in most of South America over the past 15 years, the poverty rate in the region has fallen considerably. ItĀ declinedĀ from 43.9% in 2002 to 27.9% in 2013, after two decades of no progress whatsoever.

But MexicoĀ hasn’t joinedĀ in this long-awaited rebound: its growth has remained below 1%, less than half the regional average, since 2000. And not surprisingly, Mexico’s national poverty rate was 52.3% in 2012, basically the same as it was in 1994 (52.4%). Without economic growth, it is difficult to reduce poverty in a developing country. The statistics would probably look even worse if not for the migration that took place during this period. Millions of Mexicans were displaced from farming, for example, after being forced into competition with subsidized and high-productivity agribusiness in the United States, thanks to NAFTA’s rules.

It’s tough to imagine Mexico doing worse without NAFTA. Perhaps this is part of the reason why Washington’s proposed “Free Trade Area of the Americas” was roundly rejected by the region in 2005 and the proposedĀ Trans-Pacific PartnershipĀ is running into trouble. Interestingly, when economists who have promoted NAFTA from the beginning are called upon to defend the agreement, theĀ best that they can offerĀ is that it increased trade. But trade is not, to most humans, an end in itself. And neither are the blatantly mis-named “free trade agreements”.