Miliband Calls For Inquiry Into Orgreave 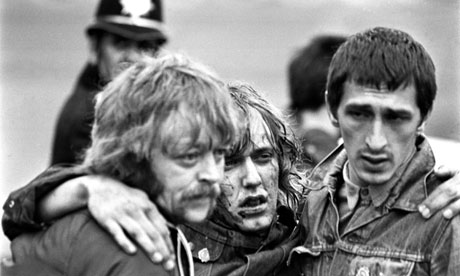 Labour leader Ed Miliband has called for a “proper investigation” into police malpractice during the 1984-85 miners’ strike and the events surrounding clashes between police and striking miners at the Orgreave coking plant 30 years ago this week.

Gareth Peirce, the solicitor who defended miners subsequently charged with riot, said she believed there were 8,000 officers present. Mounted officers with drew batons and charged into the miners, and officers on foot beat miners about the head with truncheons.

In 2012 South Yorkshire police referred themselves to the Independent Police Complaints Commission over allegations that police officers had assaulted miners at Orgreave, then committed perjury and misconduct in a public office, and perverted the course of justice in the subsequent prosecutions of 95 miners on riot charges, which collapsed in court.

But the foot dragging continues with the IPCC saying it is still “scoping” evidence to determine whether to hold an investigation. Miliband is the most senior politician to back the growing campaign to have police conduct at Orgreave fully investigated.

Miliband in a speech to miners and representatives of the Orgreave Truth and Justice Campaign at Hatfield Main colliery in his Doncaster constituency, said the miners’ strike,was “a just cause”.

“You were fighting for justice, for your community, for equality, for all the things that mattered,” Miliband said. “The values you fought for are the values that we have to take forward for the future”.

No police officer has ever been disciplined or charged with any offence arising out of Orgreave, but 95 miners were charged with riot, which carried a maximum sentence of life imprisonment.

The trials all collapsed in July 1985, after defence questioning that had exposed police testimony at odds with the film of what happened, partially identical statements by different officers, officers saying they had had statements dictated to them, an allegedly forged signature by a police officer on a statement, and generally unconvincing police evidence in the witness box.

Michael Mansfield QC, who defended some of the accused miners, described it as “the biggest frame-up ever”.

In June 1991, without admitting liability, South Yorkshire police paid ÂŁ425,000 to 39 miners who had sued for assault, wrongful arrest and malicious prosecution. Chris Kitchen, the NUM general secretary, said: “The IPCC must investigate. Some of the men assaulted and falsely accused have had anger festering for 30 years. There is no time limit on injustice. Recognising the truth is part of a healing process.”

1 Response to Miliband Calls For Inquiry Into Orgreave