Mexico And The Free Trade Debate 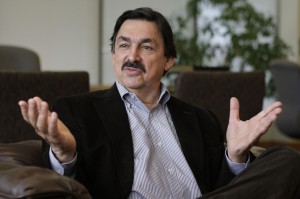 When the North American Free Trade Agreement (NAFTA) came into effect on the first of January 1994, during the government of Carlos Salinas de Gortari, the promises and expectations contradicted most of the reality that we now know 20 years later. Now it is clearer than ever that this project signed between the United States, Mexico and Canada sought to expand and protect the interests of large multinational corporations, at the cost of employment, poverty and marginalization that have been the most obvious expression of a market economy model that failed in its intended aim of generating more opportunities, free trade and development for our countries.

On the contrary, measured in terms of economic and social welfare, inequality and therefore the exploitation of labor increased, while the distribution of wealth has deteriorated reaching truly alarming levels for the future of society. In those 20 years under NAFTA, official data show that the United States has lost about 5 million jobs in manufacturing and almost 57000 companies closed.

Something similar happened in Canada and┬Ā Mexico not been able to recover the lost jobs, nor exceed the minimum level of one million jobs per year. Many of the enterprises of the most developed nations have moved to countries with lower wages where freedom of association and collective bargaining are suppressed.

A clear example of this problem is the behavior of the most outstanding corporation, Apple, which has 40,000 jobs in the United States and more than 700,000 in other countries, following a strategy of taking advantage of scale, flexibility, effort and worker skills that factories in the United States are no longer able to match, in the words of a senior executive.

The NAFTA experience raises concerns about the future of our country and the other 11 nations that plan to sign the Trans-Pacific Partnership Agreement in September. The main concern that exists today in the U.S. Congress is that Mexico, with the lowest wages in Latin America and important limits on labor rights, will take production facilities and manufacturing jobs from its northern neighbours.

It is in this context that Congressman Sander Levin, Democratic leader in the key Committee on Ways and Means, has studied the situation and has generated a lot of debate about the violation of labor and human rights in Mexico and widespread concern this contributes to favor corporate power that only seeks to maximize profits at any cost.

This healthy demand by Congressman Levin is supported by the chief economist at the Department of Labor of the United States until September 2012, Betsey Stevenson, who said:┬ĀŌĆ£Companies once felt an obligation to support American workers, even when it wasnŌĆÖt the best financial choice. ThatŌĆÖs disappeared. Profits and efficiency have trumped generosity.ŌĆØ

The free trade agreements have not won respect for labour rights. Hence the complaint that independent unions in Mexico have presented to the ILO against employer protection contracts and violations of freedom of association and collective bargaining in Mexico, which have contributed to the debate and led to the demand by the world’s most important international body on labor matters world’s that the Mexican government immediately publish union registration and statutes and comply with Convention 87 concerning freedom of association.

The clearest example of these violations, and the greatest obstacle, is the practice of “protection contracts” that some unions sign with companies behind the backs of workers and with the acquiescence and approval and of the labor authorities in their registration.

A clear case is that of the automobile industry, a sector in which the CTM has 95 percent of the contracts and where wages have lagged far behind those obtained in the United States or Canada, where a worker earns between 40 and 60 dollars per hour, while in Mexico they average about 10 dollars a day, performing the same tasks and using the same machinery.

Professor Harley Shaiken, director of the Center for Latin American Studies at the University of California, Berkeley, who is a student of NAFTA, has noted that in Mexico the increase in productivity in manufacturing is accompanied by lower wages. Professor Shaiken’s research has shown that the situation has deteriorated between 1993 and 2011, as real wages of Mexican workers fell 20 percent while productivity increased by 80 percent.

In the negotiations of the Trans-Pacific Trade Agreement, (TPP) the Mexican government is pushing to expand the rules of origin in the automotive industry from 62.5 percent in NAFTA to 65 percent in the TPP. That position is positive and should be accompanied by measures that have been taken to curb subsidized imports of steel from China, because it would be paradoxical and regrettable that Japanese companies produce cars in Mexico with Chinese steel.

Along with these efforts should come the replacement of Conciliation and Arbitration Boards with labor courts and the elimination of the requirement for government certification of union elections (toma de nota).┬Ā If labor and trade strategies do not change at the same time, the justice and equity that not only Mexican workers but the entire population are seeking cannot be achieved.