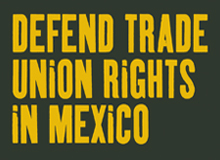 In a sign that things are beginning to change for trade unions in Mexico following the election of a left wing President AndrĂ©s Manuel LĂłpez Obrador the Mexican mining and steelworkersâ€™ union Los Mineros has won an important election victory at the El Boleo Mine in Santa Rosalia in the State of Baja California Sur.

By a vote of 280-238, the workers at El Boleo voted for Los Mineros over an imposed company union that was installed by the labor contractor, Servicios y Desarrollos Meseta Central SA de CV, without consulting the workers.

The mine is controlled by Korea Resources Corporation (KORES), which is owned by the government of South Korea.

â€śThis victory shows that the workersâ€™ courage and determination can overcome corporate repression and government collusion,â€ť said United Steelworkers International President Leo Gerard. â€śBut it also underscores the fundamental unfairness of Mexicoâ€™s repressive labor law system that condems its workers to poverty level wages while threatening the jobs of Canadian and U.S. workers. Mexicoâ€™s new government must move quickly to reform its labor laws and end the practice of company-dominated unions, and the proposed US-Mexico-Canada trade agreement (USMCA) must include effective enforcement provisions to prevent and punish violations of workersâ€™ rights.â€ť

On April 20th, 2016, the workers at the mine went on strike to demand the removal of the company union and free elections.

The strike was broken by a large force of police on May 5th, and a month later the company fired 130 Los Mineros supporters.Â  The federal labour authorities then blocked the Minerosâ€™ demand for an election for over two years in an attempt to discourage the workers.

Three workers were injured in a cave-in on April 2nd, 2016,Â  and two were dismissed.Â  There are no medical facilities at the mine, and the nearest hospital is in Guerrero Negro, 200 kilometers to the north.Â  Female workers accuse management of tolerating sexual harassment.

Click here and here for more information on how companies collude with yellow unions in Mexico.