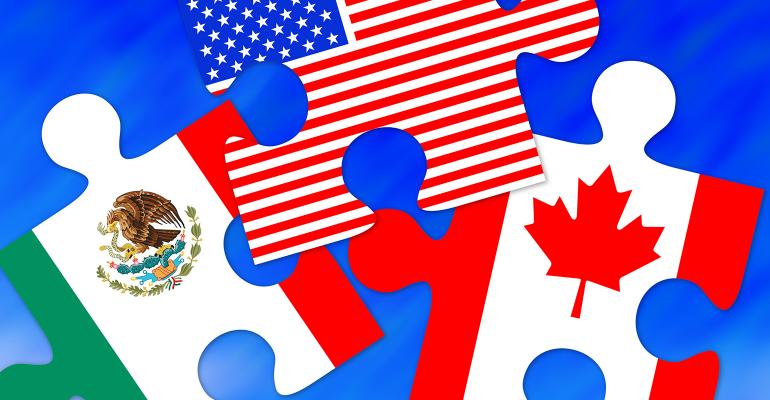 Sent in by Ben Davis of the United Steelworkers
From Inside Trade, March 27, 2018

The bill, introduced by PRI on March 22, claims to implement constitutional labor reforms that were adopted by the Mexican government in February 2017. The proposed law would retain the non-independent structure of labor arbitration boards and would not prevent the implementation of so-called ‚Äúprotection contracts,‚Äù labor sources told Inside U.S. Trade. Those contracts are collective agreements signed between an employer and a union without the consent of the workers.

The key accomplishment of the constitutional labor reforms is that it would abolish the tripartite structure of the conciliation and arbitration boards (CABs) which, according to one U.S. labor source, are non-transparent labor dispute systems composed of three board members ‚Äúwithout the best interests of the unions in mind.‚Äù The board members include a representative of the employer, the government and a union. However, the source said the unions represented on the CABs are ‚Äúnot independent unions at all‚Äù and usually are represented by corporate interests.

However, the source said the March 22nd bill, if passed, would allow Mexico to implement the labor reforms in a way that would run afoul with the labor standards that negotiators are working on in a revised NAFTA by violating language referencing the International Labor Organization Declaration that has been included in recent U.S. FTAs.

‚ÄúIf this implementing legislation passes, it will create a system of labor justice in Mexico that undermines rather than protects workers’ rights of freedom of association and collective bargaining,‚Äù the source said, adding that the legislation would reinstate Mexico’s ‚Äúcorrupt labor justice system.‚Äù

If NAFTA‚Äôs labor chapter is based on the May 10 deal and the Trans-Pacific Partnership, Mexico will be required to adopt and maintain — in law and practice — laws that protect workers‚Äô rights of freedom of association and collective bargaining, the source said. The PRI bill does not do that, the source said.

On labor, the May 10th deal — struck between congressional Democrats and the Bush administration in 2007 — stipulates that countries must adopt, maintain and enforce ‚Äúinternationally-recognized labor principles, as stated in the ILO Declaration on Fundamental Principles and Rights at Work,‚Äù including the freedom of association and right to collective bargaining. For instance, the TPP labor chapter required that ‚ÄúEach Party shall adopt and maintain in its statutes and regulations, and practices” such as the ‚Äúfreedom of association and the effective recognition of the right to collective bargaining.‚Äù

USTR‚Äôs labor proposal, tabled last September, mirrored language included in TPP, which generally reflected the May 10deal. That proposal fell short of Democrats‚Äô hopes. Congressional Democrats have told USTR that a new NAFTA should require Mexico to increase its wages, among adding other enforceable labor standards. Negotiations over the labor text are expected to continue to be contentious until the NAFTA talks conclude.

The U.S. source also said the timing of the March 22nd PRI proposal could act to pressure the U.S. to respond within weeks.

‚ÄúThe fact that the government introduced this now suggests they will actually try to push it through,‚Äù the source said, adding the U.S. has just over one month to address the developments before the first session of Mexico‚Äôs Congress wraps up for the year and the country is ‚Äúoverthrown by election politics.‚Äù

‚ÄúNothing will happen after that until 2019,‚Äù the source said. Mexico will hold its presidential election on July 1st.

A senior staffer for a U.S. union who attended the last negotiating round in Mexico said the passage of this bill — which could be as soon as next month — would send a stark message to the U.S. in the context of the NAFTA talks.

‚ÄúEssentially they are saying ‘we are going to make this as hard for you as possible and you are going to have to give us something else in order to get us to back off of this reform,’‚Äù the source told Inside U.S. Trade. Citing a January 23rd letter sent by 183 Democratic lawmakers to U.S. Trade Representative Robert Lighthzier, the source said the lawmakers ‚Äúlaid down some clear markers‚Äù on what they wanted out of NAFTA’s labor proposal.

‚ÄúThe [Democrats] laid down some markers on that,‚Äù the source said. ‚ÄúCertainly if this reform were to go through the way it is now it would make it harder to get to where at least [those lawmakers] are trying to go. Presumably that’s what the Mexican government is intending to do — lock in these regressive changes so that it will be harder to raise in the NAFTA negotiations.‚Äù

By threatening to push this legislation through, Mexico is ‚Äúputting down a direct challenge to the U.S. — you want better rights for Mexican workers? Come and make us. And I think, again, the letter from the 183 [Democrats] — that makes it pretty clear what they think about it and how that will impact overall negotiations,‚Äù the source said adding, ‚ÄúU.S. unions would be pretty disappointed if this were allowed to go through.‚Äù

‚ÄúIf this bill is approved in the current session of Congress, which looks like what Mexico is trying to do by April 30, that would send a very negative message which would undermine the Mexican constitution itself because several of the provisions in this bill directly contradict it,‚Äù he said.

The new bill, the source continued, included a ‚Äúwhole lot of‚Äù additional procedures that ‚Äúessentially would make it impossible for a large part of the workforce to ever unionize.‚Äù One of those requirements is that for unions to register for a collective bargaining agreement they ‚Äúhave to produce list of social security numbers of all the workers,‚Äù which the source said do not exist for a number of Mexican workers. ‚ÄúSo, it punishes workers for employers’ failure to register, it’s just full of things like that.‚Äù

The March 22nd legislation is similar to a bill that was introduced last year by the PRI, but not passed by the Mexican Congress. The only significant difference, according to U.S. labor sources, is that the new bill addresses subcontracting issues raised by the AFL-CIO and Mexico’s National Labor Union (UNT) in a Jan. 25 complaint opposing the bill. That complaint was submitted to the Labor Department under the North American Agreement on Labor Cooperation.

‚ÄúThey are billing that as a big change,‚Äù one source said.

The other issues, outlined in the AFL-CIO and UNT’s 42-page complaint, remain outstanding, the labor sources said.

Those issues include a provision that establishes what is known as the Federal Institute of Conciliation and Registration, which according to the complaint, imposes ‚Äútripartite control through a new ‘Technical Council’ that would be comprised of ‚Äúemployer-dominated‚Äù unions that have ‚Äúperpetuated the protection contract system that the Constitutional reform was designed to remedy.‚Äù The establishment of the institute, the complaint continues, ‚Äúwill have severe consequences for freedom of association and collective bargaining‚Äù given its ‚Äúlack of independence.‚Äù

The new bill also includes a provision that doesn’t require labor inspectors to specifically verify that workers approve ‚Äúthe collective agreement by a secret ballot vote,‚Äù thus undermining workers collective bargaining rights. The constitutional reform, if implemented as intended, would ensure elections are ‚Äúpersonal, free, universal and secret,‚Äù the complaint continues, and ‚Äúfor purposes of collective bargaining the union would have to demonstrate that it represents workers at the workplace if it seeks a strike notice to oblige the employer to bargain.‚Äù

‚ÄúReforming the collective bargaining process in order to promote the negotiation of legitimate collective agreements was the central motivation of the constitutional reforms,‚Äù the complaint states. ‚ÄúHowever, the bill undermines these reforms.‚Äù The bill also includes obstacles for a union to surmount before initiating a strike, such as providing ‚Äúextensive documentation of its representativity, some of which it may not have access to.‚Äù

During the last round of NAFTA talks earlier this month in Mexico City, Rep. Sander Levin (D-MI), former chairman and ranking member of the House Ways & Means Committee, said the briefing he received from negotiators was ‚Äútotally inadequate‚Äù because it did not touch on what he called key issues, including Mexico’s ‚Äúauthoritarian-type labor structure.‚Äù

Levin, during an event hosted by Georgetown Law on March 8, cited the constitutional amendment expanding labor rights in Mexico but said concerns about the implementing legislation persist.

‚ÄúA constitutional amendment expanding labor rights was passed, but it required effective implementation by the Mexican Congress,‚Äù Levin said. ‚ÄúA recent submission under NAFTA spells out how the implementation is moving more and more in the wrong direction.‚Äù — Isabelle Hoagland (ihoagland@iwpnews.com)