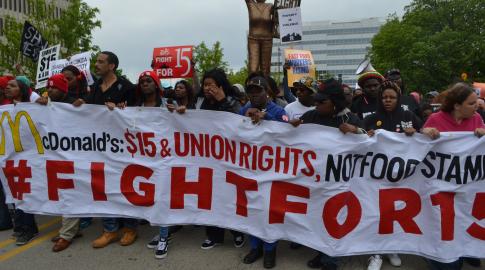 McDonald Workers Demonstrating in the USA

Workers at two McDonald‚Äôs outlets, in Cambridge and Crayford, London have voted to take industrial action over concerns about working conditions and the use of zero-hour contracts.

They also are seeking a wage increase to at least ¬£10 an hour says their union the Bakers, Food and Allied Workers Union (BFAWU).

In a statement the BFAWU said: ‚ÄúWorkers have found themselves living on low wages with no guarantee of hours. This has been viewed by some as punishment for joining a union, and has seen employees struggle to meet their rent payments, whilst some have even lost their homes.”

McDonlad’s UK employees have been inspired by similar moves in the USA where fast food workers are campaigning to be paid $15 (¬£11.65) an hour. At the moment the UK National Living Wage stands at ¬£7.50 for workers aged 25 and over, and ¬£7.05 for those aged 21 to 24.

Ian Hodson, BFAWU national president, added: ‚ÄúMcDonald‚Äôs has had countless opportunities to resolve grievances by offering workers a fair wage and acceptable working conditions. This is a call for change.‚Äù

McDonald‚Äôs made a switch to flexible or fixed contracts with minimum guaranteed hours, in April this year and claimed it had increased hourly wages by 17% over the past two years.

A spokesman for McDonald‚Äôs said: ‚ÄúAs per the terms of the ballot, the dispute is solely related to our internal grievance procedures.”