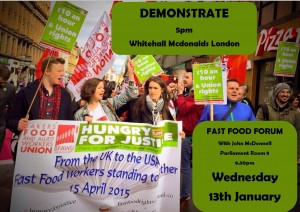 Flyer for demonstration at a London McDonalds.

McDonaldŌĆÖs is to offer its UK staff working on zero-hours employment contracts the option of moving to fixed hours following a long campaign against their employment practices by unions and campaign groups such as Fast Food Rights and Better Than Zero. The chain is one of the biggest users of the contracts in the country, with an estimated 80,000 workers on zero hours.

Paul Pomroy, the boss of McDonaldŌĆÖs UK, said the company was ŌĆśrevamping its employment policyŌĆÖ after staff said they were struggling to get loans, mortgages and mobile phone contracts because they are not guaranteed employment each week.

The company has now started offering staff the option of moving to contracts guaranteeing a minimum of 4 hours, 16 hours or 30 hours work a week following a trial run in St Helens, Merseyside, which McDonaldŌĆÖs is to roll it out across the country.

But about 80% of workers in the St. Helens trial decided to stay on zero hours – of those who took up the fixed-hours option, three of five went for the maximum of 30 hours.

Pomeroy said: ŌĆ£In September, the feedback was that there is an element of people within our restaurants that did want to look at a more permanent set of hours. It was driven by the difficulty they were facing getting car loans, mobile phone contracts, mortgages. It was not that they werenŌĆÖt getting the hours they wanted at McDonaldŌĆÖs, but as financial lending tightened it was becoming a real challengeŌĆØ

The trial in St Helens included 246 people, with 42 taking up the offer of fixed hours. The company plans to expand it to another six restaurants in London and the east Midlands from May, testing how it works in school holidays, before rolling out the new policy across the country from the end of the year.

Once the national roll-out begins, it could take a year to be in every restaurant, partly due to technological upgrades required in the shift-scheduling system. McDonaldŌĆÖs say they could evolve the proposals as they are rolled out, with a 40-hour contract potentially introduced.

Under the trial, staff are offered contracts in line with the average hours per week they work. New starters will still have to wait three months to be offered a fixed-hours contract.

Steve Turner, Unite assistant general secretary, said: ŌĆ£On the face of it, this move by McDonaldŌĆÖs is a step in the right direction and shows the likes of Sports Direct that businesses can wean themselves off their addiction to insecure zero-hours contracts and give their staff the security of a permanent contract. Zero-hours contracts leave people not knowing from one week to the next whether they can feed their kids or pay bills and should have no place on BritainŌĆÖs high streets. While the devil will be in the detail, this move by McDonalds suggests that the penny is finally dropping with some employers over the exploitative nature of zero hours contracts and the dissatisfaction they can breed among a workforce.ŌĆØ