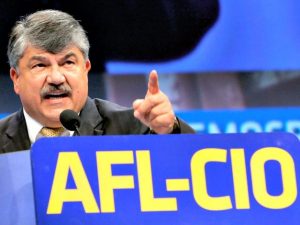 President Trump‚Äôs nomination of Andrew Puzder to be U.S. Secretary of Labor betrays the promise he made to put working people first. Puzder‚Äôs record as the CEO of fast food corporation CKE Restaurant, as well as his public statements, reflect not only a callous disregard for the welfare of workers, but also a shocking ignorance of the agency‚Äôs important mission. On behalf of the twelve and a half million members of the AFL-CIO, I urge you to reject this nomination.

Under President Obama, the Department of Labor (DOL) brought new energy and focus to its mission of improving Americans‚Äô wages and working conditions. It made important progress in every area under its jurisdiction, from wage and hour enforcement to workplace health and safety and protecting Americans‚Äô retirement security. Based on what we know of Andrew Puzder, all of these gains are in danger of being wiped out should he be confirmed.

Over the last eight years, by focusing on low-wage industries where workers are more vulnerable to being cheated out of their wages, the DOL secured nearly $1.6 billion in back pay for over 1.7 million workers whose employers flouted the law. If put in charge, Puzder would almost certainly weaken or repeal these enforcement initiatives – during his tenure, his company has been cited for over 1,000 wage and hour violations. Puzder‚Äôs rationale for not paying managers their earned overtime is that the ‚Äúsense of accomplishment‚Äù and ‚Äústature‚Äù that comes from not punching a clock should be compensation enough.

Puzder has not been shy about expressing his opposition to improving overtime protection or raising the minimum wage from its current $7.25 an hour‚Äînot adequate to keep even a full-time worker out of poverty‚Äîto just $10.10 an hour. Although the last Republican ‚Äìcontrolled Congress repeatedly thwarted efforts to raise the minimum wage, the Obama administration did raise it for federal contract workers. Given Puzder‚Äôs pronouncement that the government should ‚Äúget out of the way‚Äù rather than raise the minimum wage, we have no doubt that he would like to torpedo even this modest progress.

The Obama DOL also cracked down on businesses that try to evade their legal obligations to their employees by misclassifying them as independent contractors, bringing in long-term ‚Äútemporary‚Äù workers, contracting out work to outside firms, or abusing the franchise model.¬ÝIn FY 2015 alone, DOL investigations of low-wage industries, where misclassification is rampant, resulted in the payment of more than $74 million in back wages for 102,000 workers. It is crucially important that the next Labor Department continue this important work to ensure that workers receive the critical benefits and protections to which they are entitled. We are skeptical that Puzder would continue these enforcement initiatives concerning worker protections, given his vehement opposition to the NLRB ‚Äújoint employer‚Äù decision and complaint against McDonald‚Äôs, both of which rein in employers‚Äô ability to manipulate the franchise business model to their advantage.

Under President Obama, enforcement of worker protection laws was strengthened with increased focus on employers who repeatedly and flagrantly violate the law. The DOL issued landmark job safety regulations on silica, coal dust and other workplace hazards that will save hundreds of lives a year. Overall, workplace fatalities and injuries have declined‚Äî2016 was the safest year in the history of the mining industry, with a record low number and rate of mining deaths.

By contrast, Puzder‚Äôs record on workplace health and safety is extremely alarming. In recent years under his leadership, serious OSHA violations resulted in Carl‚Äôs Jr. and Hardee‚Äôs employees requiring hospitalization because of serious burns; his company was fined tens of thousands of dollars. Not surprisingly, Puzder strongly opposes the DOL core functions of regulating and enforcing workplace health and safety. Allowing Puzder to assume the Labor Department helm could roll back important regulations and weaken government oversight and enforcement.¬Ý It means more worker injuries, illnesses, and even death.

The Labor Department‚Äôs most important accomplishment in the area of retirement security is finalizing its ‚Äúfiduciary rule,‚Äù which requires that retirement investment advice be in the client‚Äôs best interest, not tainted by the advisor‚Äôs conflicts of interest. One analysis found that retirement savers lose as much as $17 billion a year from financial advisors‚Äô conflicted advice. The retirement savings plan of Pudzer‚Äôs corporation gives us little confidence that he will be supportive of this long-overdue rule, since it evidences little commitment to workers‚Äô retirement security.¬Ý Since 2011, there have been no employer contributions; it carries high-fee investments, has low participation, and is generally inferior to many of its counterpart plans in the fast food industry.

The record is clear. Andrew Puzder is in no way an appropriate candidate to head the U.S. Department of Labor. We urge you to reject his nomination.

Thank you for your consideration of our views.