Len McCluskey’s Blog: We Must Win The Fight For Trade Union Freedom 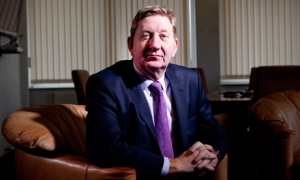 The fight for trade union freedoms, our legal right to represent our members has gone on for too long. It is fight we must win urgently.┬ĀIt should be a matter of great shame that in 21st┬ĀCentury Britain ordinary working people can have such basic rights withheld from them.

For more than three decades trade union freedoms have been cut away and curtailed. The legacy of the Thatcher government ŌĆō its unrelenting attack on the lives of ordinary workers and their families ŌĆō has lingered on into the 21st┬ĀCentury.

Organised Labour, our most effective tool for working people to achieve social change and improvements now faces legal restrictions that apply to no other organisations in our society.┬ĀAt the same time as successive governments have shackled trade unions, they have been deregulating and setting-free corporations and the markets to wreak havoc.

We now know that this growing imbalance has been bad for society and bad for the economy, causing the greatest economic crash of all time.┬ĀSuccessive governments have been determined to silence the voice of ordinary workers.

Tragically, the Labour Party, the Party our forefathers and foremothers created to be the voice of organised labour, failed to ditch one single restriction on trade unions introduced by the Tories. ┬ĀWorse still Tony Blair boasted that his government would ŌĆ£leave British law the most restrictive on trade unions in the Western worldŌĆØ.

The result of this shameful collusion between our political elites has been:

The fall in collective bargaining agreements nationally and across sectors has been a key factor in increasing inequality.

The International Labour Organisation says countries with strong support for collective bargaining have a significantly smaller wage gap between those at the top and those at the bottom. ┬ĀAnd yet the past three decades have been characterised by rising inequality and a low wage economy.

Between 1975 and 2013 ŌĆō the share of our national income used to pay the wages of ordinary people fell from 65% to 53%. The number of UK workers covered by collective bargaining is now 23%.

Put simply, more money was being sliced off the top ┬Ā– hidden away in financial black holes. The consensus that companies and corporations should operate without any interference from government ŌĆō whilst the strong arm of the law impedes on the freedom of workers to organise ŌĆō should be dead in the water. But it is not.

We now face a government more ideological, more aggressive, more arrogant. A Prime Minister and Chancellor willing to use the global financial crash as an excuse for tearing apart everything we hold dear ŌĆō the NHS, our welfare state, our public services.

The things we built over generations ŌĆō they are selling off in a matter of months and years. Their answer to a crisis caused by an unregulated, unscrupulous City full of fat cat bankers and traders is to cut taxes for the rich whilst attacking the employment rights of the low paid and vulnerable.

Thirteen years of Labour standing still on trade union rights has led the way for the Tory led Coalition restart their attack on employment rights just where they left off and we are moving backwards once again.

And the arrogance with which this government behaves can leave no one in any doubt about the magnitude of the attack we now face. Putting venture capitalist Adrian Beecroft, who heads Wonga.com, in charge of employment rights was like putting Dracula in charge of the blood bank.

And renewing the push for a low wage, low growth, flexibility economy is a one-sided agenda directly in the interests of employers.

Increased insecurity in the workplace and bad bosses allowed to do as they please.┬ĀFor the political elite, insecurity at work is not a problem. For the Tories, itŌĆÖs not even unfortunate. ItŌĆÖs their aim.

The trouble is there is not one shred of evidence supporting their ideas. We have already seen Redundancy Notice cut in half 90 days to 45 ŌĆō the tip of the iceberg if the Coalition gets its way. They are pushing ahead with the discredited ŌĆśshares for rights schemeŌĆÖ, which employment lawyers and employers say wonŌĆÖt work.

Only the Coalition could tell you that you can create jobs by making employment more insecure and letting bosses sack at will. It is the politics of the madhouse.

Our evidence tells us that economies and industries with employment protections and a regulated market have stronger and more sustainable economies: Higher employment and a more equal society.

Government can only carry out these attacks whilst organised labour ŌĆō the voice of working people ŌĆō are shackled and bound.┬ĀThat is why I and Unite supports the┬ĀCampaign For Trade Union Freedom┬Ālaunched last weekend.

To fight against the legal assault which has held us back for a generation ŌĆō and to fight for positive rights for our members.

Throughout our history it is only through organised labour that workers have won basic rights or improved conditions and pay. ┬ĀWe have been fighting for our trade union freedoms for too long and now it is time to win them back.

Trade unions have been a force for good in our society. From the abolition of child labour, the suffragettesŌĆÖ movement for womenŌĆÖs votes, the fight against fascism, the creation of the welfare state and the National Health Service.┬ĀThe establishment of equal pay legislation, the minimum wage, right through to maternity and paternity rights, these are achievements only obtained through protest, civil disobedience and organised labour.

On each of these issues the trade unions were on the side of the angels. Only by winning back our freedoms can we win a fair settlement for working people.