Leaving The ECJ: What Will It Mean? 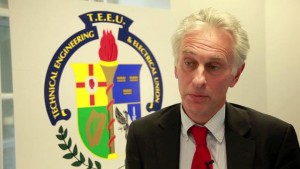 It‚Äôs not possible for the Tories to both protect workers‚Äô rights and satisfy their red line demand that the European Court of Justice should have no legal effect in Britain, writes Professor Keith Ewing, president of the Campaign For Trade Union Freedom.

Now that Brexit is inching closer, a number of questions are becoming more urgent. Not least is the question of workers‚Äô rights.

What is to happen to the great body of labour law that derives from the EU?

Hard Brexit will expose workers‚Äô rights on three fronts. In the first place, it means that any new rights that are developed at EU level will obviously not apply in Britain (or to those parts that voted Remain).

There is not much in the pipeline at the moment. But there are, nevertheless, proposals in the admittedly weak European Social Pillar for the protection of workers in the new tech industries for better transparency in the employment relationship and for EU unfair dismissal laws. These will not apply here.

A second consequence is that even if Social Europe is dead, rather than dying, there is still the framework of existing rights and the opportunity to develop them through litigation and access to the European Court of Justice (ECJ).

For those on the left, there is of course the haunting impact of the Viking and Laval cases, placing the rights of business above the rights of workers; the right to freedom of establishment trumping (in every sense of the word) the right to strike.

We are also traumatised by the recent Usdaw case in which the Collective Redundancies Directive was narrowly interpreted to defeat claims by workers who had been employed by Woolies, and before that the Alemo-Herron case in which the Acquired Rights Directive was narrowly applied in the interests of business where public services are outsourced. As a result, workers lost the right to the continuing protection of collective agreements that had previously applied.

But while all that may be true, there have also been important victories. On equal pay, it was the ECJ that established in Britain the principle of equal pay for work of equal value. And on discrimination, it was the same court that swept away the arbitrary and artificial limit on damages that had been imposed in domestic law. On working time, it was the ECJ that established the right of all workers to holiday pay, removing the Blair government‚Äôs denial of holiday pay to Bectu members employed on short-term contracts.

It stamped out other working time abuses, such as employers not treating as working time the periods spent on call at the workplace, and employers not paying holiday pay because it is already rolled up in (inadequate) monthly or weekly wages.

True, it will not be a disaster if we are denied access to the ECJ, but it will be a significant loss all the same. If the existing EU rights are ‚Äúnovated‚Äù into British law as part of the process of the ‚ÄúGreat Repeal Bill‚Äù promised by the Tories, the substance of these rights will be determined by the British courts whose decisions led to many of these successful challenges in the ECJ. It will lead inevitably to a two-tier system of employment law in which our EU origin rights will as a result of litigation fall behind those operating in the EU 27.

There may be some on the left who are content as a result. If so, they have a poor grasp of history.

But this of course is not the end of it. A third consequence of a hard Brexit is that there is nothing to stop the Tories chipping away at EU origin employment rights, while retaining the basic structure. What is to stop the Tories restoring the restrictions on holiday pay that were ruled unlawful in the Bectu case?

And what is to stop them revisiting Beecroft and reinstating the limit on compensation in discrimination cases? The answer is nothing.

After the ‚ÄúGreat Repeal Bill‚Äù this will all be British law, albeit EU origin British law, and it can be changed with impunity.

The Tories can keep the agency workers‚Äô regulations, but respond to business demands that they should provide even less protection. They can keep redundancy consultation but follow Vince Cable down the path of limiting the obligations on employers.

Should these or other steps be taken, there will be no right of access to the ECJ to put a brake on the government. If, as seems likely, our economy is to be tied even more closely to that of the US ‚Äî as the May government begins to look across the Atlantic rather than the Channel ‚Äî the prospects of continuing deregulation on a serious scale are by no means unrealistic. But about all that is left to deregulate are the rag bag of EU employment rights whose future existence now relies on the slender thread of a promise by May and David Davis.

That promise is built on a contradiction: it is not possible for the Tories simultaneously to protect workers‚Äô rights and satisfy their red line demand that the ECJ should have no legal effect in Britain. A choice has to be made. The right choice is clearly set out in the Workers‚Äô Rights (Maintenance of EU Standards) Bill 2016, recently presented to Parliament by Labour and SNP MPs, which in a Schedule reveals the breathtaking scale of our dependence on EU law for protection in the workplace.

Not only does that Bill seek to preserve these rights post-Brexit as a platform on which a future progressive government could build, but it does so by requiring that in ‚Äúall legal proceedings [before the UK courts], any question as to the meaning or effect of any EU Worker Right shall be determined in accordance with the principles laid down by and any relevant judgment of the ECJ.‚Äù

The latter is an essential feature of any future settlement. But it is unlikely to be the choice made by May and her hapless government.

Keith Ewing is is professor of public law at King‚Äôs College London and president of the Institute of Employment Rights and Campaign For Trade Union Freedom.

This article first appeared in the Morning Star on January 31st, 2017