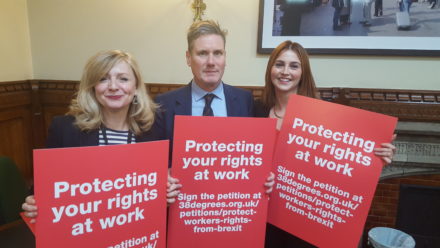 January 11th saw MP Melanie Onn launch her backbench bill to protect workers rights during the Brexit negotiations and to stop the Tory Government inserting ‘sunset’ clauses into the Great Repeal Bill which would mean they would be able to repeal EU employment rights without going to parliamant. The bill ensures that EU employment rights are protected as UK primary legislation along with EU court decisions which affect employee rights.

Speaking at the launch Keir Starmer, the shadow Brexit secretary, said he did not trust the government on workersâ€™ rights. He referred to comments made by Priti Patel, now the international development secretary, during the referendum campaign who said that she wanted to â€śget rid of 50 per cent of rightsâ€ť including â€śworking time directiveâ€ť.

The Working Time Directive protects workers from being forced to work long hours – but importantly it also provides protection for workers on guaranteed holidays, guaranteed rest breaks between shifts, meal breaks at work and the employment of minors.

Starmer also suggested that Labour could seek to amend the article 50 legislation, saying â€śwe need to think about amendments to the billâ€ť. When asked to clarify this in a question, he added that Labour is â€śactively considering what weâ€™re going to put downâ€ť.

Starmer said that most voters, whether they supported leave or remain, did not vote to destry their employment rights.

The private members bill, which is tabled for Friday, is at risk of not being heard, as the Tories could talk it out. However Onn said if the Tories were really serious about protecting EU employment rights they should back the bill.

It was pointed out the bill was a good â€ścampaigning toolâ€ť and sets a â€śgold standardâ€ť for future workersâ€™ rights legislation to meet.

â€śRights for working people in Britain have been hard-won, often the result of decades of pressure from the labour movement. Brexit gives the Government the opportunity to undo all that work,â€ť Onn said.

â€śMy bill would protect in the strongest form of UK legislation all workersâ€™ rights which are derived from the European Union. It will be the first test of whether the Conservatives will keep to the promise Theresa May made at their Party conference in October last year, that workersâ€™ rights will be maintained after Brexit.â€ť

Starmer said: â€śItâ€™s absolutely vital that leaving the EU does not lead to any reduction in workplace rights.â€ť

â€śThe bill would ensure that the workplace rights millions of people rely on â€“ from parental leave to rights for agency workers â€“ are enshrined in UK law and cannot be watered down as a result of Brexit.â€ť