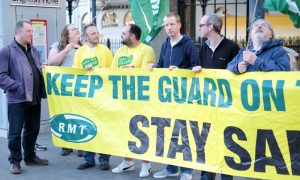 Last week Tory MP for Croydon Chris Philp introduced the Industrial Action (Protection of Critical National Services) Bill under 10 Minute Rule which called for transport unions to wait for authority from the High Court before they could take industrial action.

Philp told the Press Association he thought his proposals have â€śgood prospectsâ€ť of eventually becoming law but the Bill was quickly defeated by Labour when it was heard. However, it provides an insight into the ideology followed by many Conservative backbenchers.

The backbencherâ€™s proposals included having a High Court judge rule on whether industrial action within sectors like transport was â€śreasonable and proportionateâ€ť before it could go ahead. In addition, transport union would be required to provide a â€śskeleton serviceâ€ť on strike days, even if strike action is allowed to go ahead â€“ thereby removing the leverage trade unions currently holds to equalise the imbalance of power between employers and workers.

Philp stated that his plans would balance the â€śright to strikeâ€ť with the â€śright to get to workâ€ť, but putting such restrictions on the right to strike would mean that unions have very little power in negotiations with employers over wages and conditions, tipping the balance even further in the favour of employers.

The MP based many of his proposals on the recent strikes on Southern Rail, which he claimed was disproportionate.

It seems the public disagrees, as a recent survey of survey of 1,000 people conducted by the Association for British Commuters (ABC) found that only 5% thought the unions (RMT and ASLEF) were entirely to blame for the strikes, with over half blaming either the Department for Transport or Southern Rail.