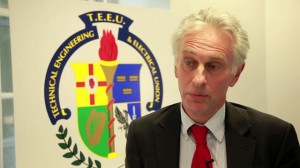 The Battle of Falkirk is a symptom of a bitter civil war in the Labour party. On the one side are the cavaliers, the Blairite faction led by Progress, a well-funded campaign group. On the other side are the roundheads, a trade union grounded interest, committed to return the Party to its roots. Both sides seem equally determined to prevail.

Needless to say, the corporate press has made common cause with the cavaliers, in a battle it helped to create. But although it would be folly to predict the outcome of this battle, early signs are that the Labour party leader is seeking to broker a truce and that an uneasy peace will break out, at least for the time being. This is subject of course to the substance of any of the vague (party) constitutional reforms now being proposed, and the interests they serve.

All of this conveniently masks a potential scandal relating directly to the relationship between the Labour Party and its affiliated trade unions (by virtue of which trade unions institutionally are members of the Party in their own right, with rights and duties arising as a result). This is a scandal created by the government, and which unsurprisingly has attracted neither coverage nor censure from the corporate press.

The scandal has its roots in the government‚Äôs¬Ýrecent announcement¬Ý¬Ýon political lobbying, soiled by its unexpected inclusion of an attack on trade union support for the Labour Party. Apparently any money spent by an affiliated union campaigning at an election is to be treated not only as a ‚Äòthird party expenditure‚Äô as at present, but also as a Labour party expenditure for the purposes of electoral law. As such, it will count towards the Party‚Äôs electoral spending limit.

Since 2001, there has been a limit on the amount of money a political party can spend at an election, the limit being based on the number of candidates standing in the party‚Äôs name. For parties that put up candidates in every constituency, this works out at somewhere just below ¬£20 million on the campaigning costs incurred in the year before the election. Smaller candidates with fewer candidates get to spend less.

A separate limit applies to so-called third parties ‚Äì businesses, pressure groups and trade unions. Here the limit is set somewhere just below ¬£1 million in the year before the election, on election campaign costs incurred supporting or opposing a particular political party. The reason for these third party limits is obvious ‚Äì designed to prevent the limit on the political parties from being undermined by wealthy organisations steaming in behind or against them.

Although we await the detail of a proposal that has surprised even its own side, the government‚Äôs plan appears to be that affiliated union expenditure will be treated as Labour Party expenditure whether or not the Party has approved it, and whether or not the Party benefits from it. As such, the proposal looks like it has been lifted straight from anti ‚Äì union political funding legislation recently introduced by a right wing government in New South Wales. No surprise there.

But not only is the Coalition‚Äôs proposal a devious political stunt designed at the time to deflect attention from the government‚Äôs own failings on lobbying, it is also a disgraceful example of government proposing to use the power of the State in breach of ‚Äòan established custom‚Äô recognised by Churchill in 1948, that ‚Äòmatters affecting the interests of rival parties should not be settled by the imposition of the will of one side over the other‚Äô.

The proposal is all the more remarkable for the fact that it has never formed part of the discussions or the recommendations of any of the recent party funding inquiries. There is no mention of it in the controversial Hayden Phillips report, nor in the more recent equally controversial report of the Committee on Standards in Public Life. Both these documents recognized that while affiliated unions are members of the Labour Party, they are institutionally distinct from it.

That apart, the proposal is almost certainly unlawful in this country, as it is said convincingly to be in Australia. First, it is a violation of the Convention rights of affiliated unions, which alone of electoral participants will be gagged for a year before an election, unless they do one of two things. Either they can disaffiliate from the Labour Party to retain electoral freedom; or they can seek Party permission to incur an expenditure that will be attributed to the Party.

But it is not only affiliated unions that will have cause to complain: so will the Labour Party. The Labour Party‚Äôs case will arise where a union incurs expenditure without its approval, which will nevertheless be treated as the speech of the Party, even though the Party is opposed to the speech in question. This cannot be consistent with the idea of freedom of expression, which is designed to enable me to say what I think, not to hold me responsible for what someone else may think. It is grotesque.

The violence directed at the Labour Party and the legal claim on behalf of the Party is aggravated not only by the fact that no other political party will be subject to this indignity. Aggravation is piled on aggravation by the fact that the Party will have to spend money from its legally capped budget to repudiate views attributed to it, with which it must nevertheless dissociate itself. Being deemed to have spoken the words of others is thus not simply a philosophical concern; it is potentially a matter of real electoral consequence.

The Lib Dems as Coalition partners have an opportunity to nip this nonsense in the bud, and to rescue both Churchill‚Äôs constitutional convention, as well as human rights obligations to which the party purports to adhere. It is difficult to comprehend a more serious violation of human rights in the electoral sphere than a de facto ban on electoral free speech. Even more so were the government‚Äôs proposals to apply also to candidates individually under the Representation of the People Act 1983, ss 75 and 76.

Having opened this box, however, if the Lib Dems are serious about third party influence at elections, they will know that the real problem has little to do with trade unions. The real problem lies with the immunities enjoyed by the biggest third parties of them all, the media corporations which have an express exemption from all statutory limits, and are subject to no controls at election time, free to spill partisan bile with impunity. Why are the companies owned by Murdoch, Rothermere, and others above the law in this way?

And perhaps the Lib Dems might recall this. Unlike the election spending limits, the referendum spending limits introduced by Labour in 2001 did not give any exemption to the newspaper companies. This meant that like everyone else, their campaigning activities would be subject to a limit of ¬£500,000 in a referendum campaign. This would mean in turn that ‚Äì in the AV referendum for example ‚Äì they would have to use their newspapers to report what was happening, rather than become partisans in the campaign.

But what did the Coalition do? It changed the law in 2011 to release the newspaper companies from this restriction, handing them the opportunity to pour toxins into the campaign without restraint, in what was a spectacular own goal by the Deputy Prime Minister. So my question to Clegg is this: if you are willing to allow foreign owned newspapers to campaign without restraint in an election, on what possible ground can you justify a de facto ban to prevent organisations sustained by millions of British electors from doing the same?

All of this rather assumes that trade unions will continue to be affiliated to the Labour Party. True, the party leader is being encouraged by some inside and outside the party to have a ‚Äòclause IV moment‚Äô, by unilaterally breaking the union link. But this is ill-conceived: under the (legally binding) Labour party constitution, the link can be broken only with the consent collectively of the unions themselves. So if the Blairites really want to break the link, they will have to split and form a new party.

In the meantime, trade unions will continue to be affiliated to the Labour Party.¬Ý So long as this is the case, they are entitled to same electoral freedoms as other organisations, Mr Clegg.

First published on the website of the UK Constitutional Law Group

1 Response to Keith Ewing: Another Political Attack On Free Speech