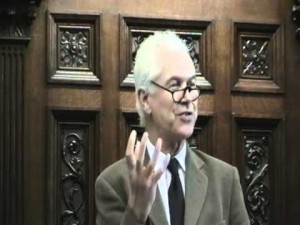 CTUF Vice PresidentÂ Â John Hendy QC told the People’s Assembly in London on June 22nd that collective bargaining was a human right and insisted wages should be set by workers and “not the great and the good.”

John told a packed debate on ‘Reunionising The UK’ at the People’s Assembly Â that the end of collective bargaining was a huge problem in Britain today.

“The 1970s were the most equal decade in history but when Thatcher came to power in 1979 neoliberalism came in,” he said.

Mr Hendy said eight out of 10 workers were protected by collective bargaining at the end of the 1970s but today most have lost that protection.

“Those not protected are at the mercy of the employer. Collective bargaining is the only way workers can be heard at work,” he said.

He pointed out that collective bargaining was also vital to reduce inequality.

He called for “wages set by reps of the workers – not the great and the good. Collective bargaining is a right under international law and is also a human right.”

Unite union rep Kelly Tomlinson addressed the debate before joining the People United buses run by the Unite, Unison, GMB, PCS and CWU unions, which set out across England to ask people for their ideas for a People’s Manifesto.

She said there was a need to connect with the public. “People will understand that their pay packets are falling and we need to educate young people about trade unions.”

She urged the audience to go away and think of five people who are not in a union and talk to them.

Faiza Shaheen of the New Economics Foundation think tank said wages had fallen since the coalition took power and the problem was not just in the public or private sector but across the board.

“Those at the top have seen incomes rise. Work doesn’t pay – that is the lie that they tell you,” she said.